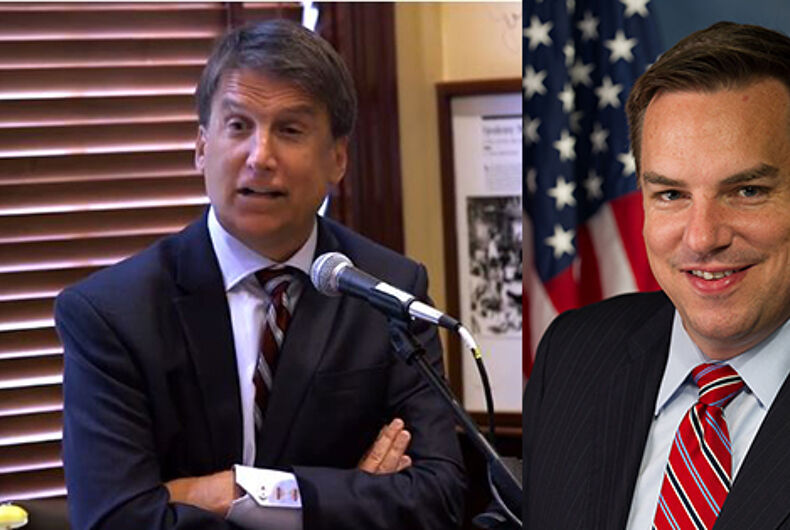 The National Collegiate Athletic Association and Atlantic Coast Conference have both pulled championship games out of North Carolina over the anti-LGBT bill HB2. The NCGOP is not taking it well, digging in its heels even as the state continues to reel under the weight of boycotts.

The latest meltdown comes in the form of questioning the NCAA and ACC’s tax exempt status for daring to stand up against North Carolina legislating bigotry into law.

“This is political theatre by the NCAA and ACC,” U.S. Rep. Richard Hudson said in a statement. “If these multi-million dollar, tax-exempt organizations were interested in social change and not making a political statement, they would proceed with their marquee events in North Carolina and enact any transgender bathroom policy they wanted. This blatant political move — less than two months before the election — brings into question their tax-exempt status. This is an avenue we intend to explore.”

HB2, also known as the “bathroom bill,” invalidated local non-discrimination ordinances and requires transgender individuals to use the bathrooms and locker rooms matching the gender on their birth certificates in government owned buildings.

“This issue of redefining gender and basic norms of privacy will be resolved in the near future in the United States court system for not only North Carolina, but the entire nation,” Gov. Pat McCrory said in a statement. “I strongly encourage all public and private institutions to both respect and allow our nation’s judicial system to proceed without economic threats or political retaliation toward the 22 states that are currently challenging government overreach.”

And yet, McCrory is reportedly willing to call a special session to repeal HB2 if there is enough support among lawmakers to do so, but only after Charlotte repeals their ordinance.

McCrory also brought up the NCAA and ACC’s tax exempt status in a speech in Charlotte to the Hood Hargett group of business and civic leaders on Thursday, where he called them “multi-billion dollar…tax exempt organizations,” and bemoaned them meeting “behind closed doors” without calling first to speak with North Carolina lawmakers.

When McCrory sat down with Chuck Todd on “Meet The Press” in April he admitted that he had not met with any transgender individuals before signing HB2 into law, doing so just hours after it was passed by lawmakers.

Transparent’s Jill Soloway honored for LGBTQ advocacy ahead of Emmys