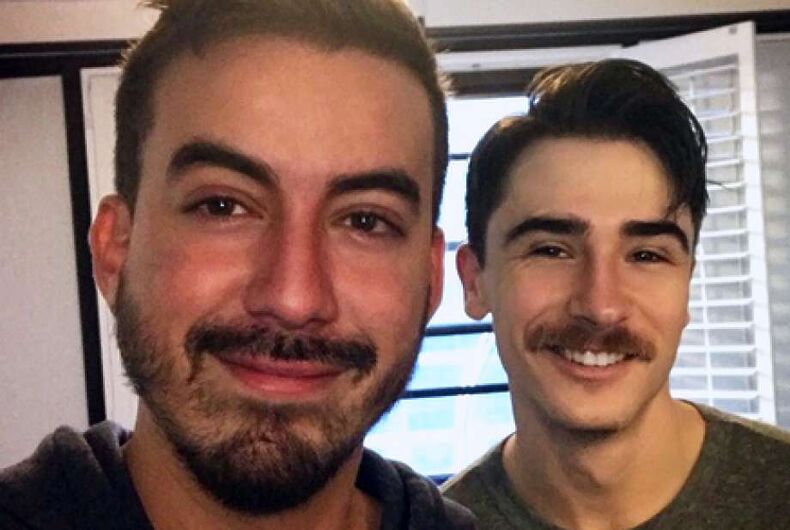 San Francisco police are searching for the attackers of two visitors to the city who pepper-sprayed them in an unprovoked and unexpected assault. The only clues to a possible motive are homophobic slurs, hurled at the men by their attackers because they are gay.

Neil Frias and Jeff White, each 28, were in town from New York City to attend the Folsom Street Fair, the world famous leather-themed street party in San Francisco’s Fillmore district, when White stopped for a moment outside a McDonald’s.

“The thing that was the most remarkable about the situation is how unprovoked it was,” White told the San Francisco Chronicle. “I was literally tying my shoe when they came at me. It’s mind-boggling.”

It was 7:30 p.m., according to San Francisco police Sgt. Michael Andraychak, and Frias was inside the restaurant. Two men in a blue minivan began yelling homophobic slurs at White, Andraychak told the Los Angeles Times.

They were saying, ‘You fags are destroying family values,’” Frias told the Chronicle. “I said I didn’t want any trouble, and one of them got out of the van.”

Another man followed, Frias said. From inside, police said Frias saw three more men jump out of the minivan to join their friends, so he rushed to White’s side. That’s when the five assailants attacked, police said, yelling more epithets and pepper-spraying both men.

” I thought he was going to take a swing at me, but he sprayed me across the face,” Frias said, who posted on Facebook that he “was blind for about three hours.”

White said he assumed the fetal position on the sidewalk to protect his face, crawling into a ball. “I was completely vulnerable,” he said. “I thought they were going to start beating me.”

Wben a woman who witnessed the attack shouted that she was calling police, the five men got back into the minivan and sped away. Both police and paramedics rushed to the scene, and attended to Frias and White, who went back to their hotel and have since recovered.

“It was one of the scariest moments of my life,” said Frias. “To think that people have so much hatred inside of them to target people.”

Police say the Special Investigations Division, which handles hate crime investigations, will be leading the search for the attackers, and hopes surveillance video might aid in that investigation.