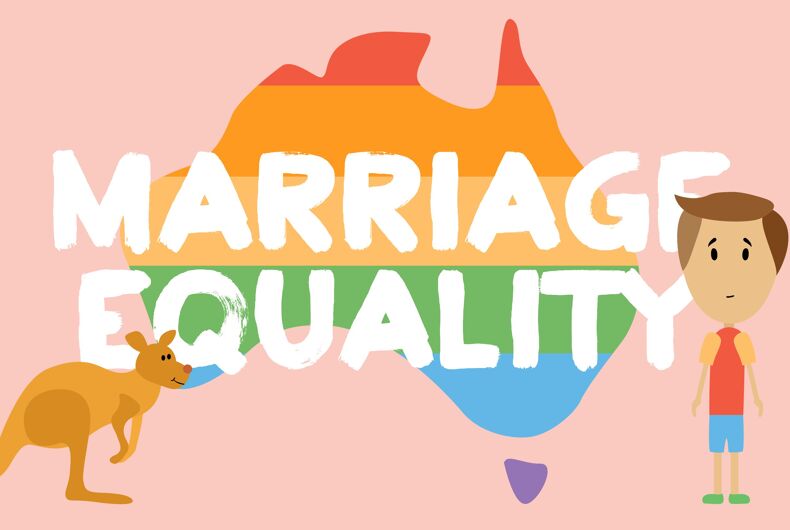 CANBERRA, Australia (AP) — Government plans to hold an opinion poll in February on whether gay marriage should be legalized in Australia suffered a blow on Tuesday when a gay government senator announced that he opposed the plan.

Prime Minister Malcolm Turnbull said Tuesday that legislation would be introduced to Parliament on Wednesday to hold a plebiscite in which voters would be asked whether Australia should allow marriage equality. But such a plebiscite has no legal weight, and Parliament would ultimately decide whether the law would be changed.

A gay senator in Turnbull’s conservative Liberal Party, Dean Smith, announced that he would not vote for the Feb. 11 plebiscite to be held. Like most marriage equality advocates, he wants Parliament to decide without the divisive public debate.

They fear that government plans to spend 15 million Australian dollars ($11 million) on publicizing the cases for and against marriage equality would give legitimacy to bigoted and homophobic views. Some also balk at the AU$175 million price tag.

“In an age where public respect for the institution of Parliament is already at a low ebb, we can ill afford to further undermine public confidence by effectively admitting that our federal Parliament can no longer deal with the big questions,” Smith wrote in Fairfax Media.

The only plebiscites in Australian history rejected conscription twice during World War I and chose Australia’s national anthem in 1977.

The government does not have a majority in the Senate, and two minor parties that support same-sex marriage have said they won’t vote for a plebiscite.

The government’s only chance of a plebiscite is now the opposition Labor Party. Labor leader Bill Shorten advocates that Parliament should decide the issue.

But Shorten has not yet ruled out supporting the plebiscite to avoid a stalemate in Parliament over gay marriage that could last until the next election in three years.

“Is it really worth some of the evidence that we’ve seen of the experiences of hate, homophobia which this debate, this government opinion poll would license?” Shorten asked.

Turnbull, who opposed the plebiscite before striking a deal with hard-right party powerbrokers to become prime minister a year ago, said his government had been re-elected on the promise of a public vote.

“Mr. Shorten should stop blocking this democratic process for which we have a clear mandate from the public,” Turnbull told reporters.

But Wilson said blocking the plebiscite would give opponents three more years to peddle misinformation and build a movement against change.

“No one likes the legal standing of their relationship up for public debate, let alone a vote,” Wilson wrote.

Polls show that most Australians support gay marriage. But plebiscites and referendums — which unlike plebiscites are legally binding — rarely change the status quo in Australia.