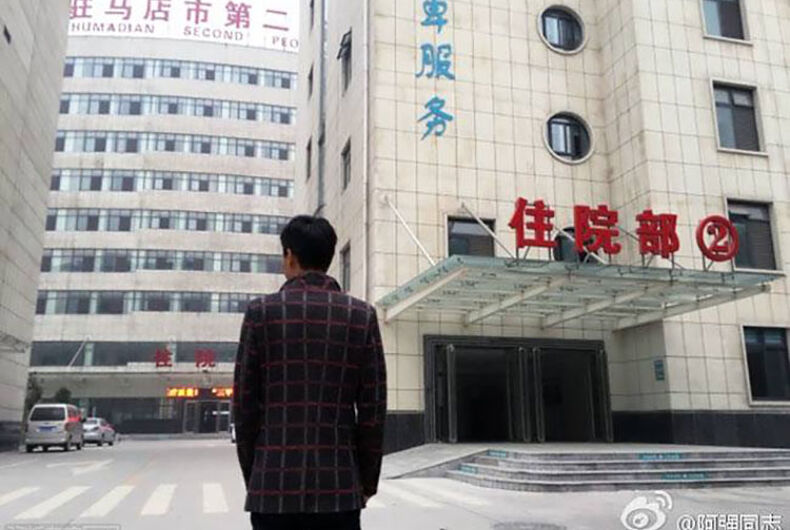 A man in China is suing doctors who tried to cure him of being gay by kidnapping him and restraining him in a psychiatric hospital where he spent 19 days being drugged and tortured.

According to CCTV, Yu Hu had been in the closet until last year, when his wife discovered he was in a relationship with another man. Although she immediately agreed to a divorce, her family was not ready for them to part ways.

Yu claims on October 8, 2015, the day he and his wife were to be divorced, his wife’s family kidnapped him and forcibly sent him to Zhumadian Psychiatric Hospital in Henan province. Yu is an alias the man has assumed to protect his identity.

For 19 days, he was drugged with a variety of unidentified medications, including antipsychotic drugs. He says the hospital staff threatened to beat him if he refused to take his meds, and that they were intent on “curing” him of his sexual orientation.

The 32-year-old was finally freed when his boyfriend and LGBTQ activists contacted police. He still has nightmares, he told reporters, and felt leaving his hometown was the only way to avoid being forcibly sent to a mental hospital again.

Yu filed a lawsuit against the hospital in May. He hopes to get a written apology and compensation for the emotional damage he suffered.

“They must be brought to justice, being gay is not a crime, but what they did to me is,” Yu said. “This isn’t only happening to me, and this must stop.”

Homosexuality is legal in China but frowned upon by traditionalists, who have been slow in acceptance that it is no longer considered a mental disorder.