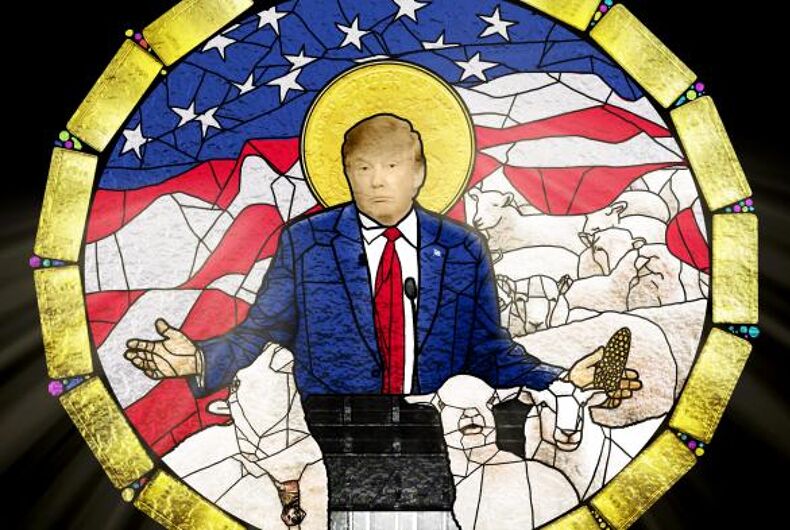 Religious right leaders have been quick to embrace Donald Trump, despite his violation of every moral principle they purport to love. Now Trump has returned the favor. In a speech last week at the Values Voter Summit, a jamboree for the religious right, Trump made it clear that he will give anti-gay evangelicals carte blanche if he’s elected president.

Trump started at a low point and went down from there. Trump began by expressing his appreciation for one of the right’s premier homophobes, Tony Perkins. “I wanted to thank our host, Tony Perkins, for his years of leadership,” Trump cooed about the head of the Family Research Council, a hate group. As if that wasn’t enough, Trump also did a shout out to another homophobe (and fellow Putin lover) Franklin Graham.

Then Trump promised the religious right basically anything it wanted, in his signature syntax. “In a Trump administration, our Christian heritage will be cherished, protected, defended, like you’ve never seen before,” he told the cheering crowd. “Believe me. I believe it. And you believe it. And you know it. You know it.”

That includes some important sops to the religious right. One is the appointment of judges who will uphold anti-gay bigotry under the guise of religious liberty.

“I have pledged to appoint judges who uphold the Constitution, to protect your religious liberty, and apply the law as written,” Trump said. “We reject judges who rewrite the Constitution to impose their own person views on 300 million-plus Americans.”

The other issue that will cheer antigay forces is Trump’s pledge to allow religious institutions to get involved in politics without losing their tax-exempt status. That’s a policy that is rarely enforced (obviously, given his audience), but that could have an outsized impact on local ballot initiatives.

Of course, the thudding irony is that Trump’s familiarity with matters of faith is about as deep as his foreign policy expertise. But that didn’t matter to his audience, who enthusiastically embraced his muddled ideas.

In July, Donald Trump promised to protect the LGBTQ community from “the violence and oppression of a hateful foreign ideologies.” Maybe. But he clearly won’t do anything to protect us from hateful domestic ones.

Protesters take to the streets in Mexico to demand marriage equality