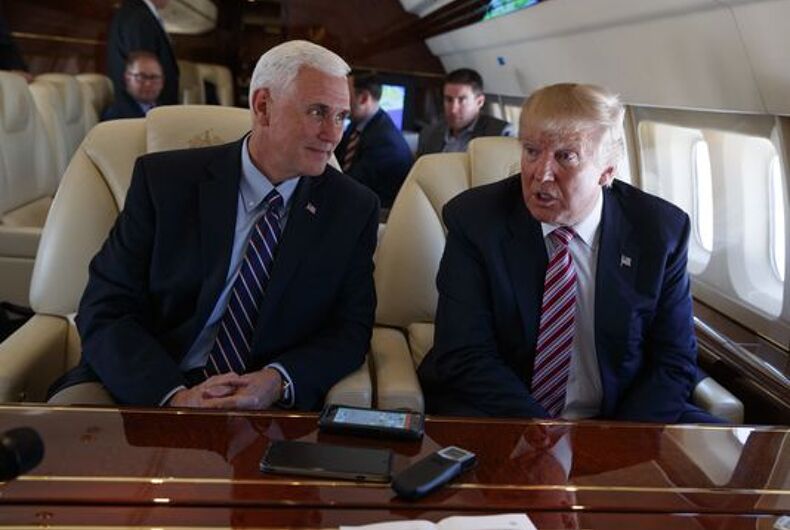 Donald Trump is a scheduled speaker at the Values Voter Summit which begins tomorrow, joining religious and political leaders who support criminalization of homosexuality.

The Value Voter Summit is an annual conference hosted by the antigay Family Research Council. And as Right Wing Watch reported, Trump’s speech at VVS put him in the company of the nation’s fiercest opponents of LGBT equality.

That’s a far cry from his claim that he will be a better “friend” of LGBTQ Americans than Hillary Clinton, when he suggested people just “ask the gays.”

The Family Research Council, its leader Tony Perkins and several speakers have a long record of anti-LGBTQ policies both in the U.S. and around the globe.

Case in point is the 2003 Supreme Court case of Lawrence v. Texas. The FRC filed an amicus brief on behalf of the state, in support of its ban on “sodomy.” The FRC called the ruling striking down the ban “a direct attack on the sanctity of marriage” and Perkins declared, “What’s at stake here is the very foundation of our society, not only of America but all Western civilization.” VVS cosponsor American Family Association had filed an amicus brief defending the law as preventing the “injury caused to the public by same-sex sodomy” and would even protect the gay people it targeted by sparing them “illness, disease and death resulting from [their] conduct.”

Perkins also defended Uganda’s antigay bill which once proposed life in prison or even the death penalty for anyone engaging in sex with a person of the same sex, RWW reported.

And his is hardly the only antigay voice at the AFA. Former AFA spokesman Bryan Fischer said in 2011 that homosexuality should be a “criminal offense.”

Other big names at the Values Voter Summit who have gone on the record to support criminal bans on homosexuality include former Sen. Rick Santorum, Family Watch International, and the legal group Liberty Counsel.