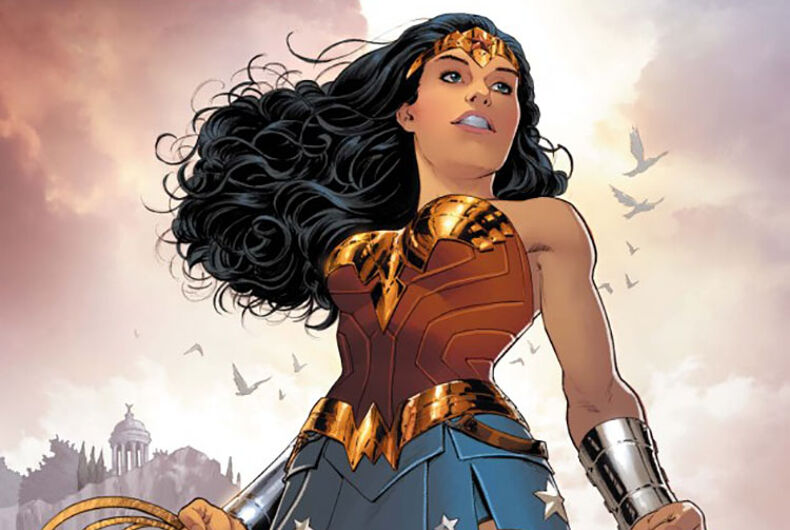 It’s unusual for someone almost 75 years old to finally come out, but better late than never for fans of the iconic Amazon named Diana, the superhero known as Wonder Woman.

In an interview with Comicosity senior editor Matt Santori-Griffith, the writer Greg Rucka — who pens her new adventures for DC Comics “Rebirth” series — answers the question, “is she queer?”

Rucka’s answer is “yes,” but he qualifies that yes with the statement, “It’s more complicated” than that. First, Santori-Griffith explained in his interview what he meant by “queer:”

“I would define “queer” as involving, although not necessarily exclusively, romantic and/or sexual interest toward persons of the same gender. It’s not the full definition, but it’s the part I’m narrowing in on here.”

Then Rucka explained why Wonder Woman is not merely queer, but must be queer, and in what context:

“This is inherently the problem with Diana: we’ve had a long history of people — for a variety of reasons, including sometimes pure titillation, which I think is the worst reason — say, ‘Ooo. Look. It’s the Amazons. They’re gay!’

“And when you start to think about giving the concept of Themyscira its due, the answer is, ‘How can they not all be in same sex relationships?’ Right? It makes no logical sense otherwise.

“But an Amazon doesn’t look at another Amazon and say, ‘You’re gay.’ They don’t. The concept doesn’t exist.

“Now, are we saying Diana has been in love and had relationships with other women? As Nicola and I approach it, the answer is obviously yes.

“And it needs to be yes for a number of reasons. But perhaps foremost among them is, if no, then she leaves paradise only because of a potential romantic relationship with Steve [Trevor]. And that diminishes her character. It would hurt the character and take away her heroism.”

And Rucka concluded: “She doesn’t leave because of Steve. She leaves because she wants to see the world and somebody must go and do this thing. And she has resolved it must be her to make this sacrifice.”

Uproxx’s Donna Dickens celebrated the news: “As a bisexual woman, Rucka’s acknowledgment was the equivalent of letting out a breath I didn’t know I was holding.” And she noted the timing is awesome just after #Bi Week concludes.

“No, Wonder Woman is not her sexual orientation. But having her confirmed as a queer character is a huge leap forward in humanizing those of us that fall somewhere between straight and gay on the LGBT spectrum. Diana Prince is a compassionate hero, a grizzled warrior, an adept diplomat…and a bisexual.”

Read the entire interview at Comicosity by clicking here.