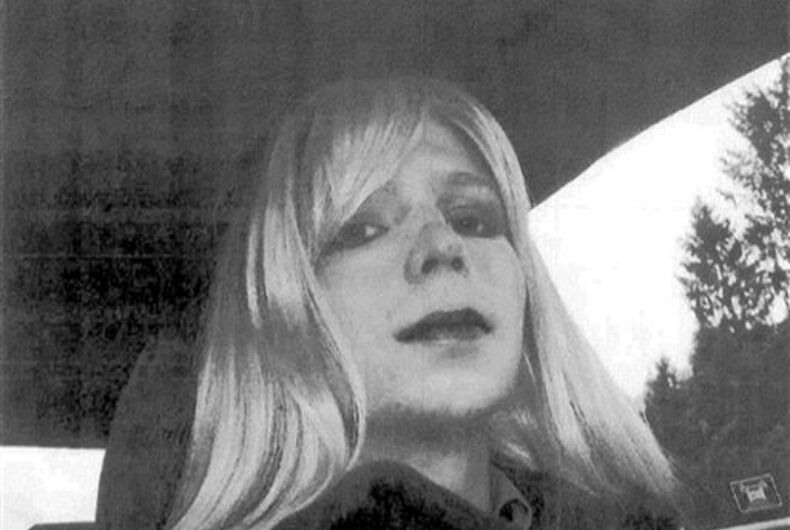 FILE - In this undated file photo provided by the U.S. Army Pfc. Chelsea Manning poses for a photo wearing a wig and lipstick. Manning, a transgender soldier imprisoned in Kansas for leaking classified information to the WikiLeaks website will end a hunger strike after the Army agreed to allow her to receive medical treatment for her gender dysphoria, the American Civil Liberties Union announced Tuesday, Sept. 13, 2016. Photo: AP Photo/U.S. Army, File

LEAVENWORTH, Kan. (AP) — A transgender soldier imprisoned in Kansas for leaking classified information to the WikiLeaks website faces up to two weeks in solitary confinement in part for attempting suicide, according to a nonprofit group that has been supporting her.

Chelsea Manning was sentenced late Thursday to 14 days in solitary confinement for a July suicide attempt and for having a “prohibited” book, “Hacker, Hoaxer, Whistleblower, Spy,” by Gabriella Coleman, according to a statement from Fight For the Future. The statement was backed by one of Manning’s lawyers.

Seven of the 14 days were suspended, but could be added to the sentence if Manning gets “in trouble” in the next six months, according to comments from Manning in the statement. She also said she can appeal the sentence and no date has been set for when the discipline would begin.

Army spokesman Wayne Hall said Friday in an emailed statement it “would be inappropriate for the Army to comment at this time.”

Manning is serving a 35-year sentence at the military prison at Fort Leavenworth. She was arrested in 2010 as Bradley Manning and was convicted in 2013 in military court of leaking more than 700,000 secret military and State Department documents to WikiLeaks. Manning was an intelligence analyst in Iraq at the time.

The ACLU also filed a lawsuit in 2014 against the U.S. Department of Defense over its refusal to treat Manning’s gender dysphoria.

“Forcing Chelsea back into solitary confinement as a punishment for her suicide attempt is extremely worrisome to me and counterproductive to Chelsea’s mental and physical health,” Nancy Hollander, a lawyer for Manning, said in an email Friday. “Essentially she is now being tortured as punishment for an act of desperation.”