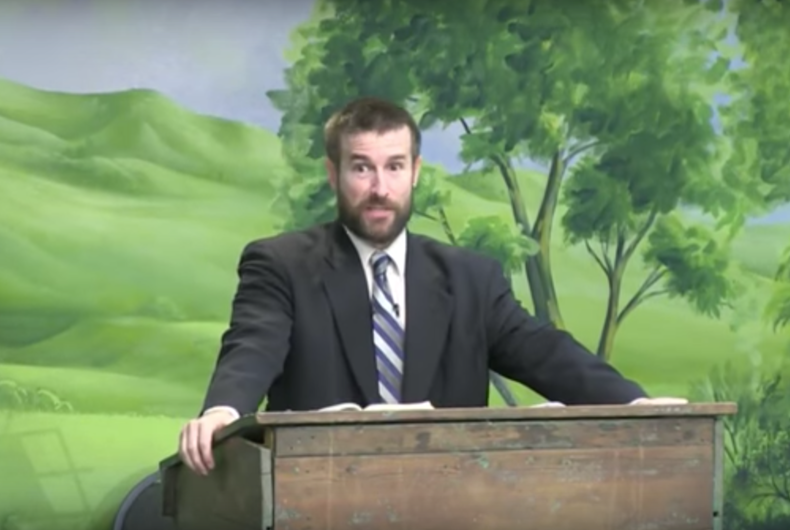 The anti-gay Arizona pastor who was recently barred from entering the United Kingdom and South Africa is now facing opposition in Botswana, the African country where he hopes to launch a ministry and engage in “soul winning.”

Members of the LGBTQ community in Botswana delivered a petition to the government Thursday asking it to ban pastor Steven Anderson who has repeatedly called for gays to be put to death, South Africa’s Independent Online (IOL) reports.

Bradley Fortuin, a representative for the Lesbian, Gays and Bisexuals of Botswana (LEGABIBO) told IOL the group is concerned about Anderson’s “tainted message.”

“I hope our country will take a leaf from our neighbour and do the honourable thing by not allowing him entry into this country,” Fortuin said.

But Anderson apparently arrived in the country on Friday. In a video posted yesterday he tells his followers that he has arrived safely in Botswana. He also claims he has already saved five souls and is planning church services for Sunday morning and evening.

After the pastor was banned from South Africa, where he had planed to launch another Africa-based ministry, he lashed out in a video-taped sermon in which he claimed to already be in the country — via media coverage — and actually admitted to spreading hate.

“They say, ‘We’re gonna ban Pastor Anderson from entering South Africa.’ I already have entered South Africa, and the media’s been helping me enter the minds of virtually every citizen by putting me on TV every day. I’m already there!” he proclaims. “‘Oh, we don’t want to let this hate into South Africa;’ the thing is you keep playing clips of me on the news saying hateful things. They’re bringing it in!”

The pastor said he was also barred from flying through London as he made his way to Botswana.

“They tell me that the United Kingdom has banned me from entering the country and that I can’t even have a connecting flight in London,” he said in a video from the airport. “Not only am I banned from the UK, but I can’t even go to the London airport.”

The pastor has gained a reputation for his homophobia. Following the tragic shooting at an Orlando gay nightclub, he told his congregation the mass murder was a good thing.

“The good news is that there’s 50 less pedophiles in this world, because, you know, these homosexuals are a bunch of disgusting perverts and pedophiles,” Anderson said. “That’s who was a victim here… just disgusting homosexuals at a gay bar.”

But that wasn’t the first time he advocated for the death of gay people. Back in 2014, Anderson grabbed headlines for a December sermon predicted an “AIDS-free world by Christmas” if all gay people were put to death.