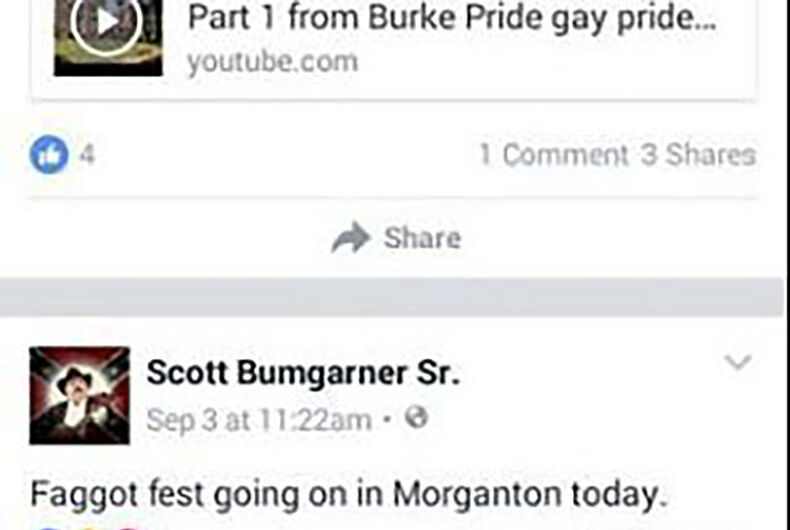 Two men and a woman who made antigay comments on a Facebook post offered apologies Tuesday night for implied threats against a North Carolina Pride festival, but then doubled down on their opposition to gay and transgender people.

The post was removed by Facebook, but screenshots that were published by QNotes and the News-Herald show that the homophobic remarks began with a post of a YouTube video about the first-ever Pride event in Morganton, N.C. Organizers say more than 400 people attended.

Scott Bumgarner, Sr. commented, “Faggot fest going on in Morganton today.” Kenny Aytes responded, “Target practice,” to which Bumgarner replied “Yes sir,” and later, “they need to go back to the closet.”

Sheriff Steve Whisenant told the News-Herald that although he was not personally aware of the Facebook thread, the District Attorney’s Office would need to determine the legal ramifications for the post.

There was indeed violence at the event, according to Seth Loven, president of LGBT Burke. Loven told QNotes a protester hit his car with a sign, some children threw sticks at eventgoers, and a thief stole a sign from his car. Loven also reported he found a frightening note on his car, which read: “You die.”