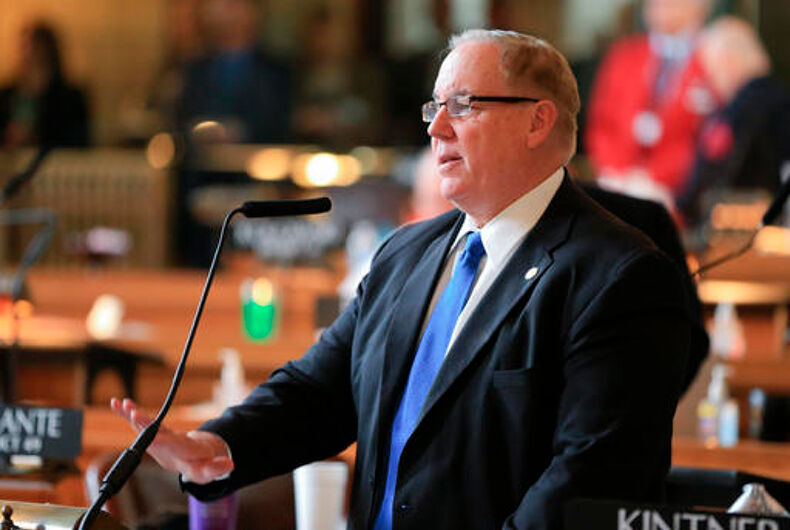 FILE - In this March 29, 2016 file photo, Nebraska state Sen. Bill Kintner of Papillion speaks during debate in Lincoln, Neb. The conservative Nebraska state senator is holding firm in his refusal to resign from office after admitting that he had cybersex on a state laptop with a woman he met online, Friday, Sept. 2, 2016. Members of the Legislature's Executive Board have threatened to recommend that he be impeached or expelled from the Legislature. Photo: (AP Photo/Nati Harnik, File)

LINCOLN, Neb. (AP) — A conservative Nebraska state senator who had admitted to having cybersex on a state laptop with a woman he met online refused to resign by a deadline of Friday set by a legislative committee.

Sen. Bill Kintner released a letter shortly before the 5 p.m. deadline saying he had considered the issue carefully but believed many of the constituents in his district wanted him to stay.

“I have not tried to hide from my sin,” Kintner said in the letter to fellow lawmakers. “I fully understand the gravity of my action and how it reflects upon the fact that I carry the title and responsibility of a state senator. I have taken personal responsibility for my action. I have apologized to God, to my wife, to you and to my constituents.”

Members of the Legislature’s Executive Board had threatened to recommend that he be impeached or expelled from office, but the board’s chairman said Friday that he doesn’t know whether there are enough votes to do so in the Nebraska Legislature, which has one chamber.

Kintner was fined $1,000 by a state accountability board after admitting to the online sexual encounter with a woman he met on Facebook. The woman, who is believed to have ties to an Ivory Coast crime syndicate, later threatened to expose the encounter unless Kintner paid her $4,500.

The bipartisan Executive Board voted 9-0 on Monday to send Kintner a letter calling for his resignation. Republican Gov. Pete Ricketts has also urged him to leave office.

“I’m disappointed,” said Sen. Bob Krist of Omaha, the Executive Board’s chairman and a fellow Republican. “It’s proof positive that Mr. Kintner is not listening to his colleagues.”

Krist said he intends to put restrictions on Kintner’s computer use and will “look very closely” at the senator’s future travel requests.

Kintner has a reputation as a blunt-spoken conservative who relishes taking on high-profile topics, including opposition to gay rights and advocating restrictions on immigration. He is not up for re-election until 2018.

Board members had been scheduled to meet Thursday to decide how to proceed, but Krist said he canceled the meeting. He said he instead plans to see if there’s enough support to convene the full Legislature for a special meeting before November.

© 2016, Associated Press, All Rights Reserved.
This material may not be published, broadcast, rewritten, or redistributed.
News (USA)
Ivory Coast, Nebraska