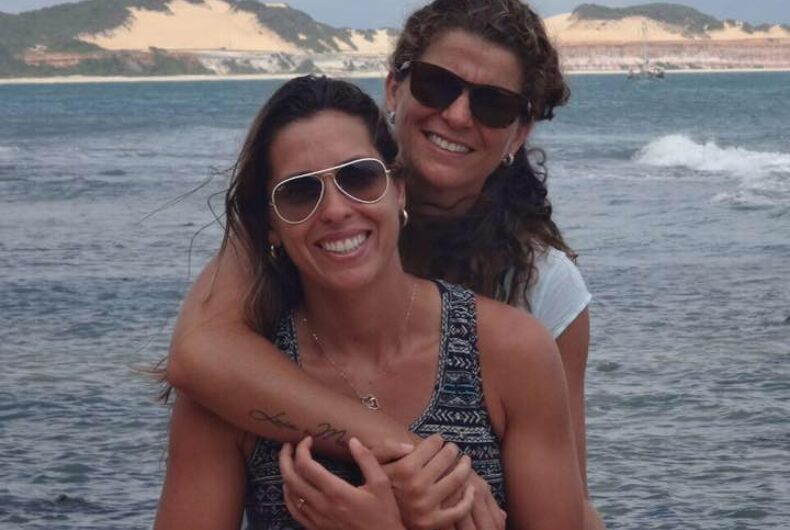 In what is yet another embarrassing moment for NBC in Rio de Janeiro, Brazil, a sports announcer covering the beach volleyball event revealed he thought that woman openly gay Larissa França was hugging was her “husband.”

To his credit, Chris Marlowe did correctly report that França and her Brazilian beach volleyball partner, Talita Antunes, defeated Team USA’s Lauren Fendrick and Brooke Sweat in a sweep on Tuesday.

That’s when Marlowe suffered a slip of the tongue, reports USA Today. He misgendered Liliane Maestrini as NBC’s cameras focused on her embrace with França.

As the jaws of viewers dropped around the world, Marlowe moved on. And Twitter exploded.

I saw this live and was confused when the commentator said "husband". C'mon @nbc @NBCOlympics @NBCSports #DoBetter 🙄 https://t.co/UYJC0qfiOf

Come on, @NBCOlympics, your commentators have GOT to get it together with this sexism and gay erasure: https://t.co/QCSAHMULrH #Rio2016

One of the responses to his apology was direct:

And one mansplained it all away:

Earlier this week, NBC was criticized for failing to mention out diver Tom Daley is gay, and that the man cheering him on was his fiancé, Academy Award winning screenwriter Dustin Lance Black.

Phil Robertson: ‘They’re going to force me to run’ for President