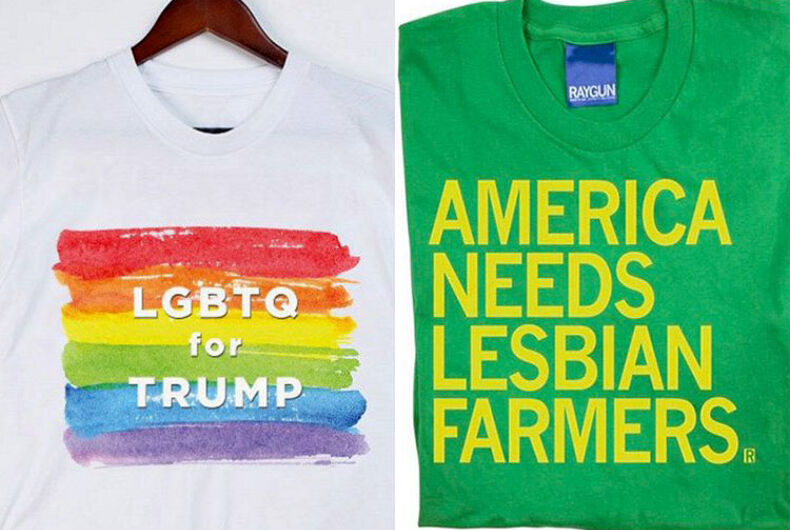 Two very different kinds of “statement” T-shirts, now available online, are guaranteed to get you noticed, and depending on where you wear it, that might not be a good thing.

Donald Trump’s campaign runs a store (natch) that now offers a Men’s Pride cotton tee. As The Advocate pointed out, “the shirt will set you back $30 — and set your rights back even further.” 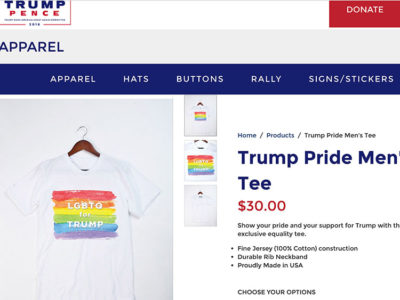 This shirt features “Fine Jersey (100% Cotton) construction,” which most likely does not refer in any way to Gov. Chris Christie or the Garden State. A Trump/Pence logo appears on the back, probably just to rub it in Christie’s face.

Plus you get a “Durable Rib Neckband,” which will no doubt come in handy in the event your more aggressive progressive friends try to rip the shirt to shreds, right off your back.

And unlike what you might have read about Trump’s hats, these shirts and all of his products are indeed “proudly made in the USA.”

Note: this shirt comes in only one size of small but three sizes of extra large to accommodate Trump-sized egos.
Click here with your tiny fingers if you dare to buy one, or just to shop.

We’re not sure if Rush Limbaugh would complain about the rainbow shirts, but a new shirt by RAYGUNshirts is sure to get the conservative radio host to boil over.

This green shirt with the words, “America Needs Lesbian Farmers,” was inspired by and is a direct response to Limbaugh’s comments at the Iowa LGBT Rural Summit earlier this month.

“Rural America happens to be largely conservative,” Limbaugh told listeners, warning them of a plot by the Obama Administration to transform America’s agriculture into something unrecognizable to his kind.

“Have you heard the latest Democrat scam? Have you heard about the Agriculture Department’s financial grants to lesbian farmers? You think I’m making this up?” Limbaugh asked his radio audience.

“See, this is how they do it. What the point of this is, folks, it’s not about lesbian farmers. What they’re trying to do is convince lesbians to become farmers.”

“I’m like you; I never before in my life knew that lesbians wanted to be farmers. I never knew that lesbians wanted to get behind the horse and the plow and start burrowing. I never knew it. But apparently enough money can make make it happen, and the objective here is to attack — they’re already attacking suburbs, and that has been made perfectly clear by what happened in Milwaukee. And they’re going after every geographic region that is known to be largely conservative. They never stop, folks. They are constantly on the march.”

Unlike the LGBTQ for Trump shirts, these sell for only $21 and are unisex. Click here for yours! 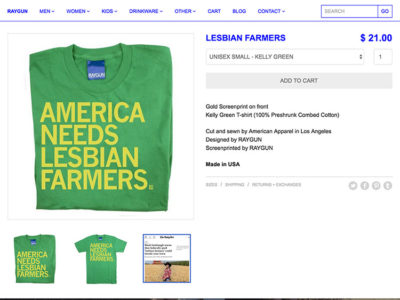