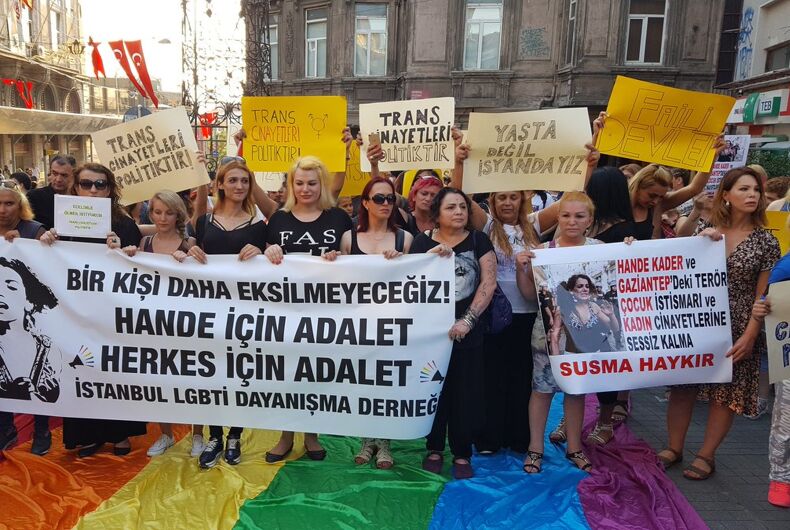 Turkish activists gather to protest the rape and brutal murder of transgender woman Hande Kedar. The banner reads: "We want to die of natural causes."Photo: via Twitter

Turkish activists are taking to the streets of Istanbul today to protest the rape and murder of a young transgender woman.

Hande Kader, a 23-year-old sex worker, was last seen getting into a client’s car. By the time her body was found on August 12 in an upper middle class neighborhood, it had been mutilated and set on fire.

“Hande was one of the nicest people in the world,” Davut Dengiler, Kader’s flatmate, told the BBC. “She was very calm normally but also hyperactive. She always went to the LGBTI marches. She pursued a cause that she felt right until the end.”

Dengiler had held out hope his missing friend was still alive until he saw her badly burned body in a morgue for unidentified people.

This wasn’t the first time Kader faced violence, he explained, noting that she’d been stabbed and beaten before. But while it may tempting to imagine Kader’s death was an extreme case, Dengiler says violence is a fact of life for transgender people in Turkey.

“This didn’t happen only to Hande,” he said. “It happens to all of them.”

Kemal  Ordek, a transgender person living in Istanbul, confirmed that they have witnessed, and continue to witness, terrible violence against transgender people.

“My phone is at the highest ringtone when I sleep at night,” they told the BBC. “I wait for news: someone will be stabbed, someone beaten and I’ll get called and I’ll have to go there immediately. This is a never-ending mourning and state of trauma.”

Still, Kader’s brutal murder has sent shock waves through Turkey and the rest of the world, inspiring a larger than usual turnout for a pro-LGBTQ demonstration.

Protestors are calling on authorities to find the perpetrator of the hate crime that has captured the attention of the global community.

According to Transgender Europe, Turkey is the most dangerous country in Europe for transgender people, though “there is no safe country for trans people.”