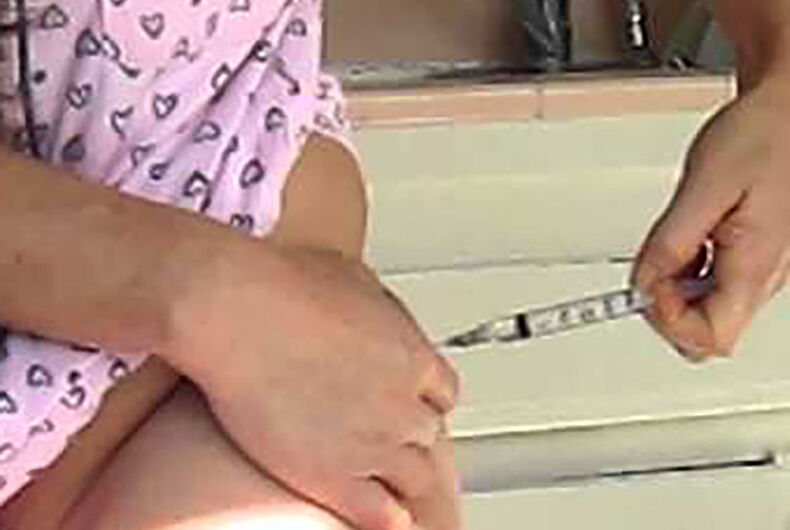 Pharmacies and clinics across the U.S. are in the throes of a national emergency, having run out of the two most popular prescription drugs transgender women use in their medical transition: Delestrogen and its generic counterpart, Estradiol Valerate, which are injected by trans women as part of their hormone replacement therapy.

A shortage of injectable estrogen in dosages of 40 mg — the highest dosage and the one most frequently prescribed to trans women — began 18 month ago, reports Out, and has remained unavailable. so doctors and nurse practioners have been prescribing double-dosages of the 20 mg injectables.

And the worrisome thing is, there’s no end in sight, which has trans women and their providers seriously concerned.

“Making myself more feminine stops me from feeling disgusted by my body,” writes Hannah Simpson, a campaign worker for Hillary Clinton who penned an op-ed about the shortage in The Guardian.

“I always was a woman, simply one with a deficiency of a certain signalling hormone, which my body so comfortably responds to now. It is about being seen as my truest self, and recognizing the effort it has taken to realize her.

“Missing hormones, on the other hand, while not directly lethal, will lead to anxiety, depression and the return of certain male features such as spontaneous erections, which trans women find uncomfortable and terrifying. But taking female hormones treats the dysphoria above all, as if tweaking my brain’s coding alongside feminizing my body. It lifts many of us from the clutches of self-harm or darker thoughts.”

“This could be extremely disruptive,” Dr. Asa Radix, director of research and education at the Callen-Lorde clinic in New York City, told The Guardian. “Some of these women have been on their formula for a very long time. Imagine all of a sudden you’re told you can’t get the medication you’re been using maybe all of their lives. So it’s not just a matter of, does the alternative perform the same?”

The alternatives are transdermal patches, sprays, creams and pills, each with varying effectiveness and their own risks. The biggest concerns about taking estrogen orally are that the hormone medication is then passed through the liver which can cause complications, and the pills also carry a risk of blood clots that is higher in older patients.

Another alternative is to find a pharmacy or clinic with another provider. For example, CVS and Walgreen’s, two of the national chains, use the same provider, but Walmart relies on another, and is not currently experiencing a shortage.

A spokesperson for Par Pharmaceuticals, which manufactures Delestrogen, told Out the company was forced to find a new manufacturer after its original supplier stopped producing the drug. Par is waiting on the Food and Drug Administration to approve new drugs it can’t ship without.

“They have batches manufactured (10mg, 20mg and 40mg) but cannot distribute until they receive FDA approval,” said Heather Zoumas Lubeski in an email to the website. “Once that happens, they can begin to ship immediately. And there’s no word how long that approval might take, something that frustrates Simpson and hundreds of thousands of other trans women.

“Trans people have teetered long enough on the fringes of medicine that this shortage feels like yet another stumbling block against getting acceptable care. The FDA continually reveals itself to be a body of bias over basis, as it doubled down on enforcing obsolete restrictions upon gay male blood donations and in effect considers trans women to likewise be men who have sex with men.”

“The FDA could do well to fast-track this bureaucratic debacle and help us trans women get on with our wonderful lives. Until then, we’re stuck in an uncomfortable holding pattern, never certain if we’ll be able to feel like ourselves, a state most people have the luxury of taking for granted.”

Tom Daley: no, I’m not married