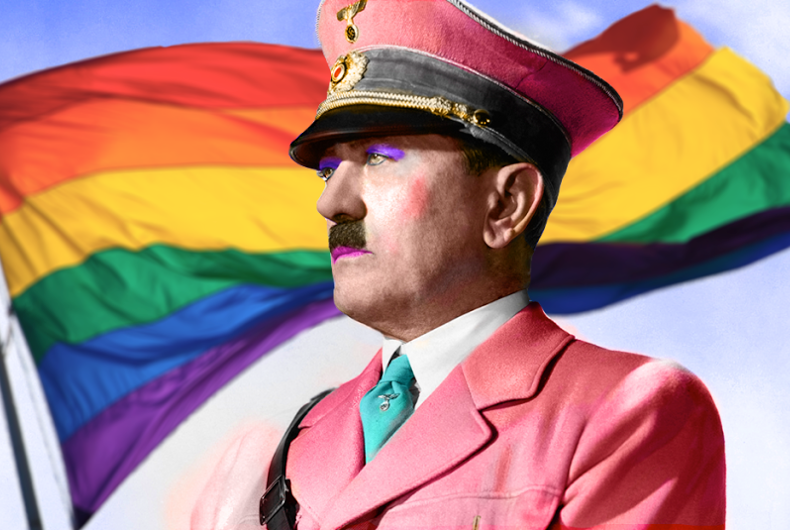 LGBT For Trump founder Chris Barron is full of soft tickles over Donald Trump’s proposed “extreme vetting” of immigrants on issues like religious liberty protections and LGBT rights. While most of the nation saw Trump’s idea for what it was – a blatant attempt to discriminate against Muslims – Barron can’t praise it highly enough.

Donald Trump once again made it clear that he is the only Presidential candidate committed to protecting LGBT Americans from the threat posed by radical Islam. While Hillary Clinton and Barack Obama refuse to even acknowledge the threat of radical Islam, Donald Trump is committed to destroying ISIS and fighting the spread of an international ideology that seeks the extermination of LGBT people across the globe.

“The terrorist attack in Orlando was an act of war against LGBT Americans and Hillary Clinton is in complete denial about it. Instead of pledging to fight radical Islam, Hillary Clinton has instead lined her pockets with tens of millions of dollars from Islamic regimes that brutalize and kill LGBT people.

“In stark contrast, Donald Trump has laid out a detailed plan to defeat ISIS, to stop the spread of radical Islam, and to protect all Americans – including LGBT Americans – from the threat of terrorism. Trump’s plan reflects the reality of a dangerous world, made more dangerous by the failed foreign policy of Barack Obama and Hillary Clinton.

“The left wants LGBT Americans to believe that this election will be about bathrooms or who will bake our wedding cakes – nothing could be further from the truth. This is about life or death for our community, and only Donald Trump understands the stakes and is committed to defending us.”

The greatest irony, as the Human Rights Campaign pointed out, is that neither Trump nor his running mate Indiana Governor Mike Pence could pass that litmus test themselves.

“Just last week, Donald Trump courted votes in Orlando from some of the nation’s most notorious anti-LGBTQ activists, including people who have worked to export anti-LGBTQ hate abroad,” said HRC President Chad Griffin. “Trump and Pence have vowed to to roll back nationwide marriage equality, supported vile laws like North Carolina’s HB2 and pledged to appoint anti-LGBTQ Supreme Court justices. Pence is best known by most Americans for the hateful denial-of-service law he peddled in Indiana last year, and even sought to divert funding from HIV programs to promote the abusive practice of so-called ‘conversion therapy.’”

Barron is former co-founder of the now defunct organization GOProud. The group was formed because, they said, the Log Cabin Republicans weren’t solid enough in their support of the GOP no matter their position on LGBT rights. After all, even Log Cabin tears into homophobic politicians on occasion.

GOProud’s other founder, Jimmy LaSalvia, left the party entirely, in part because of “the tolerance of bigotry in the GOP.”

“The current leadership lacks the courage to stand up to it – I’m not sure they ever will,” he said.

The Log Cabin Republicans still haven’t decided whether or not they will endorse Trump.