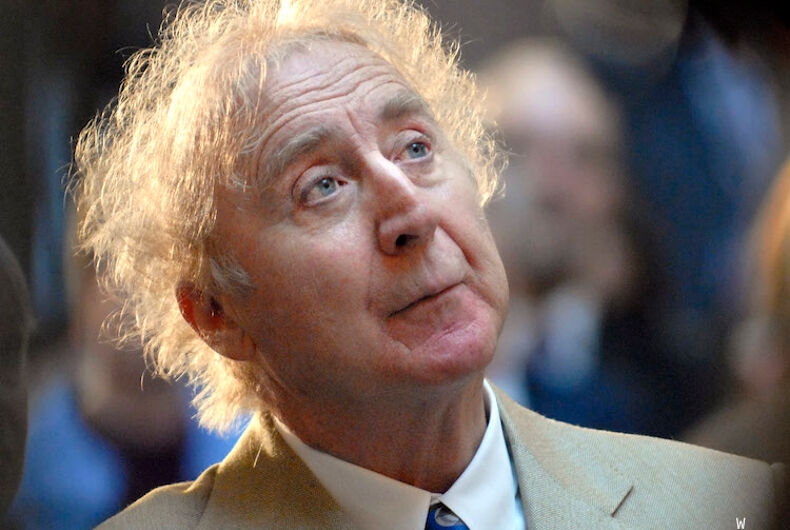 Twitter’s top trend tonight is the tributes from famous names and everyday folks to the legendary comedic actor, Gene Wilder.

He died early Monday at home in Stamford, Conn., his family holding his hands, at the age of 83. A statement from the family revealed he had suffered complications from Alzheimer’s Disease and that the diagnosis had been concealed because “he simply couldn’t bear the idea of one less smile in the world.”

He was always able to make us smile, and that is no small feat. Rest with the stars, Gene Wilder. pic.twitter.com/kxis66bIGd

R.I.P. Gene Wilder! Your Wonka remains one of my favorite films of all time!! https://t.co/1skkIUfjYw pic.twitter.com/DlqvCcrC8p

Farewell #GeneWilder, comic genius. Thank you for all those happy happy hours. pic.twitter.com/O6oHS9TQqX

RIP Gene Wilder — who inspired imagination and made us all laugh. You will be missed. pic.twitter.com/wKs5eqFpkx

Hilarious & heartbreaking in the very same moment. #RIP beautiful Gene Wilder there was & will never be anyone like you

This is an absolutely beautiful message from Gene Wilder's family https://t.co/YEzIZliiQ8

"If you wanted someone to pass judgment on your greedy, gluttonous soul, wouldn’t you choose Gene Wilder?" https://t.co/6zJI5SrTeV

Via @HuffPostQueer: Gene Wilder Agreed To Play Willy Wonka Under This One Condition https://t.co/OluqCShgka

In their brief, moving statement, the family of Gene Wilder says they count themselves "among the lucky ones":https://t.co/W3dnNjDek2

I imagine someone telling Taylor Swift Gene Wilder died & she's like "Who?" & then they tell her he played Willy Wonka & she passes out

Will the Supreme Court tell this transgender boy he has to pee with girls?