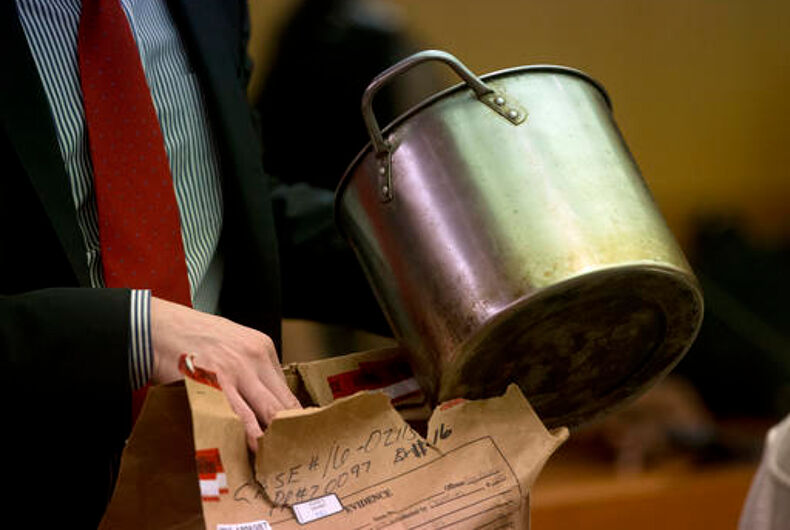 During the trial for Martin Blackwell a lawyer holds a pot they say Blackwell used to pour boiling water on his girlfriend's gay son and his friend as they slept, in Atlanta, Tuesday, Aug. 23, 2016. Photo: (AP Photo/John Bazemore)

ATLANTA (AP) — In a vicious, premeditated attack, a Georgia man threw boiling water on a same-sex couple who were asleep in bed, and told one of the men “get out of my house with all that gay,” a prosecutor said Tuesday.

Martin Blackwell is on trial facing charges including aggravated battery and assault in the Feb. 12 attack that caused severe burns and multiple surgeries for Anthony Gooden and Marquez Tolbert, who were asleep together after working an overnight shift.

If convicted, Blackwell faces up to 80 years in prison, according to prosecutors.

Blackwell last week had agreed to plead guilty as part of a deal with prosecutors but decided against it after the judge said he would order him to serve 30 years of a 40-year sentence, multiple news outlets reported.

As Tolbert and Gooden testified, Blackwell showed no emotion.

After they were doused with hot water, Gooden and Tolbert leapt from bed. Gooden ran from the apartment and Tolbert jumped around the room screaming and crying, Fulton County Assistant District Attorney Franklin Engram told the jury.

Blackwell, 48, began dating Gooden’s mother, Kim Foster, about two and a half years ago. Foster had moved into her sister’s apartment in College Park with her children. Blackwell, a long-distance truck driver, would often stay there when he was in town, the prosecutor said.

Gooden had told his family he was gay a short time before the attack and, with the exception of Blackwell, they embraced and supported him, Engram said.

Gooden and Tolbert met when Tolbert ordered food at Taco Bell while Gooden was working at the drive-thru. They’d been dating for about a month at the time of the attack.

They had found jobs together working an overnight shift and after their second shift, they went to sleep as others in the apartment were getting ready to start their day.

When Foster’s teenage daughters came home in the afternoon, Blackwell gave them money to go get something to eat to get them out of the apartment, the prosecutor said. Then he went to the kitchen, pulled out the biggest pot he could find, filled it with water, put it on the stove and waited for it to boil.

He then threw the hot water on the sleeping couple, Engram said.

Gooden’s first instinct was to flee the apartment because he said he didn’t know whether Blackwell had more water on the stove. Outside, without their wallets or cellphones, they frantically sought help. A frightened neighbor shut the door in their faces. Eventually, a friend called 911.

College Park police Officer Wayne Hood testified that he went to the apartment and Blackwell told him the two young men were having sex, making noise and were “stuck together like two hotdogs.” Blackwell said he “poured a little hot water on them” but that they’d be fine, Hood testified.

Gooden said the couple hadn’t ever had sex.

Both men suffered severe burns that required skin graft surgeries. Tolbert spent 10 days in the hospital; Gooden was there for about a month, including two weeks in a medically induced coma.

Foster testified that Blackwell had an “up and down” relationship with her children. He had said derogatory things about her son’s sexuality, but she was still shocked when she learned about the attack, she said.