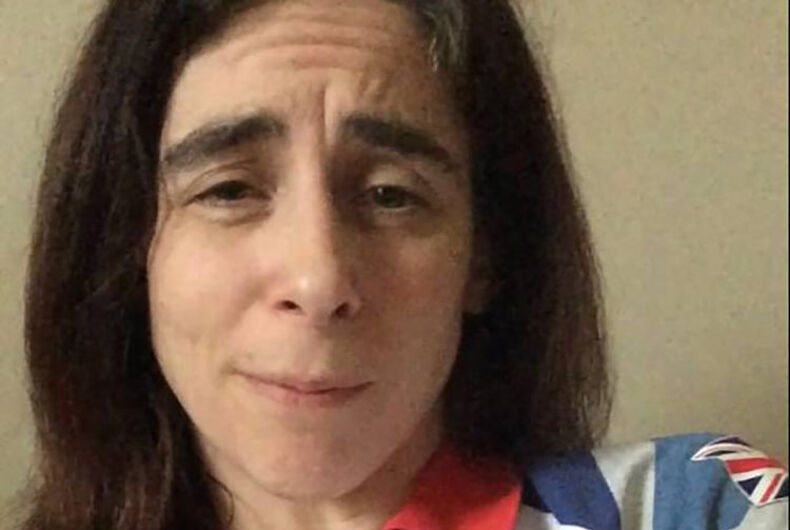 Claire Harvey is at home in England watching the Olympic games in Rio de Janeiro, Brazil, instead of competing in the paralympics as she was supposed to, all because of a freak accident that left the lesbian competitor with a broken hand.

“I broke my hand by a 6kg kettle bell falling off a shelf onto my hand whilst I was stretching,” Harvey told Gay Star News. “I was laid on my stomach and my hands out in front of me. It fell and landed on the top of my hand.”

Despite the best efforts of her medical team — “We immediately started ice, elevation and anti-inflammatories” — it soon became clear there was no way she could compete in shot put and javelin as she had hoped.

“By Wednesday, it was obvious it wasn’t healing sufficiently for me to be able to train and be at my peak for Rio,” said Harvey. “It was a real emotional roller coaster.”

In 2012, she achieved superstar status as part of the Great Britain women’s national sitting volleyball team in London. She’s taken this literally crushing defeat in the best spirit possible, thanks to her girlfriend and supporters.

“My partner Helen and friends were brilliant; keeping me to time with icing, driving me around to reviews and keeping me smiling as much as possible.”

Right now Harvey’s focus isn’t on herself but on her teammates in Rio, although every event is a reminder of what she is missing.

“The athletics squad of TeamGB are really strong, I totally believe they will bring home many, many medals. Some people didn’t get selected despite being at the top of their event – that’s how strong it was.

“So I have to hang on now to the fact that I was considered a strong enough contender for a medal to be selected.

“I’m fighting hard to get to a point that I can watch the games and support my teammates without crying. I will get there but this is everything I’ve worked towards for two years and it disappeared in one split second.”

Aware of her status as an LGBT role model, Harvey told Gay Star News she hopes she can still be an inspiration:

“I hope that I can still inspire young LGBT people — in so much as I am going to show now that you CAN move forward from something that feels like the end of the world.

“I’ll focus on healing and then coming back even stronger.

“I’ll miss the games, that’s certain, but I’m now focused on ensuring I get a medal at the London 2017 World Champs.

“Perhaps that day will be even more sweeter because of the pain now.”