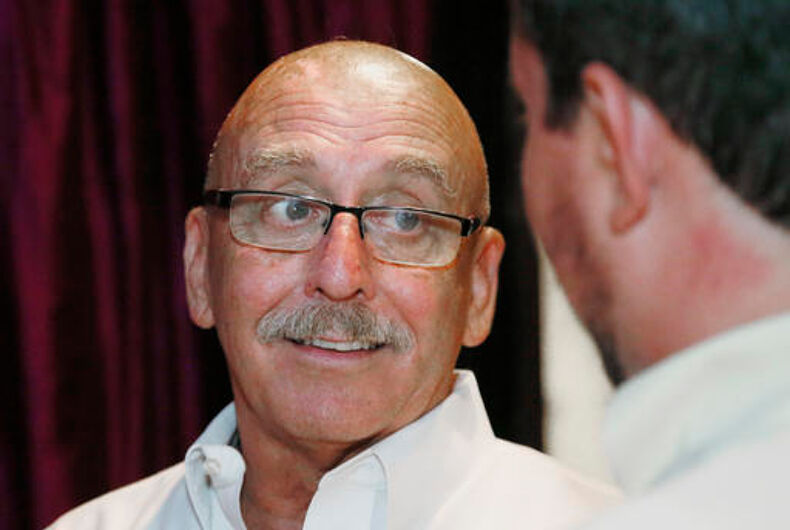 In this Tuesday, Aug. 23, 2016 photo, former state Sen. Al McAffrey, left, candidate in the run-off election in the Democratic race for U.S. House District 5, smiles at his watch party after unofficial results put him 40 votes ahead of Tom Guild, in Oklahoma City. Photo: (AP Photo/Sue Ogrocki)

OKLAHOMA CITY (AP) — The runner-up in a Democratic runoff election for an Oklahoma congressional seat in which the two candidates are separated by only 40 votes said Wednesday he has not decided whether to seek a recount, as the front-runner refocused his campaign against the Republican incumbent in November’s general election.

The runoff was a rematch of the 2014 Democratic runoff election in which McAffrey defeated Guild by more than 1,600 votes. McAffrey then lost in the general election to Republican U.S. Rep. Steve Russell, who received 60 percent of the vote.

McAffrey’s runoff lead is less than one quarter of 1 percent, but Guild said he has not decided whether to ask for a recount.

“I can get back to you when I make the decision,” Guild said.

There is no automatic recount in close elections and Guild has until 5 p.m. Friday to ask for one, Oklahoma Election Board spokesman Bryan Dean said. A full recount in all three counties in the district, which includes Oklahoma City, would cost up to $3,300, Dean said.

Although rare, elections that are decided by just a handful of votes occasionally occur, he said.

“We do have races that are decided by just a couple of votes,” Dean said. “It’s certainly not unheard of.”

Meanwhile, McAffrey said he is focusing on the Nov. 8 general election. If his lead holds, McAffrey will face Russell, who’s seeking a second two-year term, and Libertarian Zachary Knight.

“I’m not really concerned about the 40 votes,” McAffrey said. “We’ve been looking at Russell all along. We’ve got to raise a lot of money.”

McAffrey said he expects no funding for his campaign from the national Democratic Party.

“They have pretty much said Oklahoma is a red state,” he said.

McAffrey, who was the first openly gay person ever elected to the Oklahoma Legislature when he won a state House seat in 2006, is vying to become the first Democrat to represent the district in more than 40 years. Democrat John Jarman represented the district for more than two decades before switching to Republican in 1975. It’s been in GOP hands ever since.

“Oklahoma is about as red as it gets,” said Keith Gaddie, a political science professor at the University of Oklahoma.

While voters in Oklahoma City’s core have traditionally supported Democrats, voters in the suburbs and other parts of the district predominantly support GOP candidates, he said.

“The prospect is there for the Democrat, but it’s only the prospect,” Gaddie said. “Al should expect no help from Washington. He’s a wise man to not look for it.”