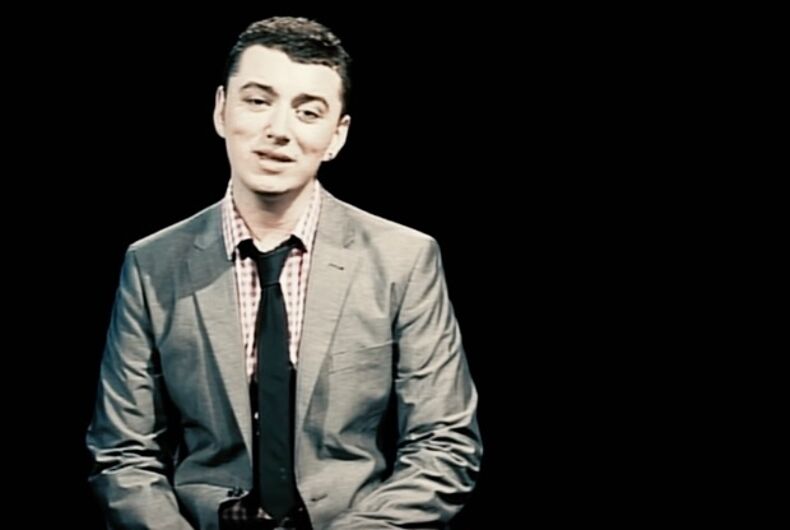 Out singer Sam Smith’s former record label is trying to cash in on his success with a previously unreleased album he recorded as a teenager while signed with Flipbook Music. Smith, however, has no part in the project.

The studio owns the right to the album and footage shot of the singer while he was working with them and they’ve packaged it all together for release. The album is called Sam Smith Diva Boy and the first single, “Momentarily Mine,” was just released online. The company also plans to release a documentary of his time with the label.

“Sam is currently an award winning global pop star, however, it didn’t happen overnight and without a lot of work,” the company writes on the YouTube page for the video. “Yes, Sam was in development and trained for success over three years with Flipbook Music, a London based Indie Label. It was at Flipbook Music that Sam’s dreams were nurtured, his, then undiscovered, talents uncovered and developed and it was there he learned his art. It’s also where he experienced all his ‘firsts’, including recording his first album, his first live and video performances and first interviews and, later on, his interviews as an informed person when he shares his views on life, love, sexuality and more. This journey was recorded every step of the way for the making of the documentary Sam Smith – The Lost Years.”

“It’s easy to see how all those ‘firsts’ shaped Sam’s, inevitable, journey to success as we watch him emerge from a ‘teenage wannabe’ to a ‘ready-to-be’ pop star and informed person ….. probably the most unique footage ever seen of a global pop star in training, leading to the fulfillment of all his dreams and ambitions … and only now being made available.”

For his part, Smith has nothing to be ashamed of when it comes to the song itself. His vocals are excellent even if his stage presence is still a little awkward. At 16, who isn’t awkward?

The company hasn’t issued a release date for the documentary or the full album.