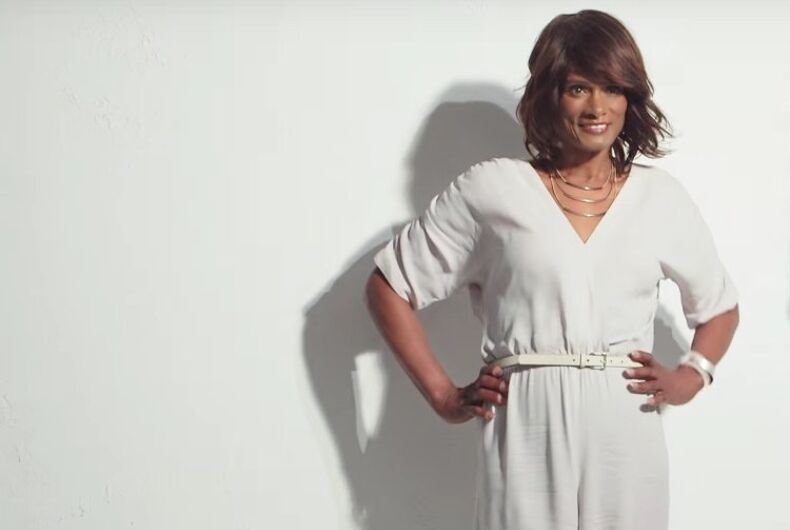 Model Tracey “Africa” Norman is back in front of the camera, and it’s a whole new world. The transgender woman whose career derailed in the 1980s after her “secret” was found out is now being proudly promoted by one of her first clients.

Clairol released a video this week featuring Norman and her story, giving her an opportunity she never had — to be her full self in front of the world.

As the film rolls, she is introduced as “The Real Tracey Norman, the first black transgender model.”  Norman recalls getting her first big modeling contract and appearing on a box of Nice ‘n Easy hair color — dark auburn, box 512 — with the tagline “Born Beautiful.”

“It was exciting because I saw my face in drug stores everywhere,” the now 64-year-old Norman recalls.

She also recalls coming out as transgender as age 18 and being met with love and acceptance by her mother. The rest of the world, however, was not so open-minded.

“Because I was working as a female model, for me, personally, I had to hide my truth. Because if I was to tell I was sure I would get fired,” Norman explains.

And she was right. Norman distinctly recalls the day everything changed. She was working at a magazine when someone came into the room and whispered something to the editor.

“That was the day my truth was revealed and yeah, my work stopped right after that,” she says.

But today, after some 40 years, Norman is back where she started — on a box of Clairol hair color. This time as part of the Nice ‘n Easy “Color As Real As You Are” line.

“Our new ‘Color As Real As You Are’ campaign celebrates the confidence that comes from embracing what makes you unique and using natural color to express yourself freely,” Clairol global associate brand director Heather Carruthers told Refinery29. “We’re honored to bring back Tracey Norman as a woman who no longer has to hide her truth. Her warm, genuine spirit and authentic approach to life make her a natural fit for the campaign.”

Norman describes her reaction to getting the news that Clairol wanted to work with her again — the real her.

“At the time I just had so many different emotions going through me. I was being accepted for who I was. And they wanted me to come back as that person and not be something other than what I truly am —”

She pauses, then smiles.