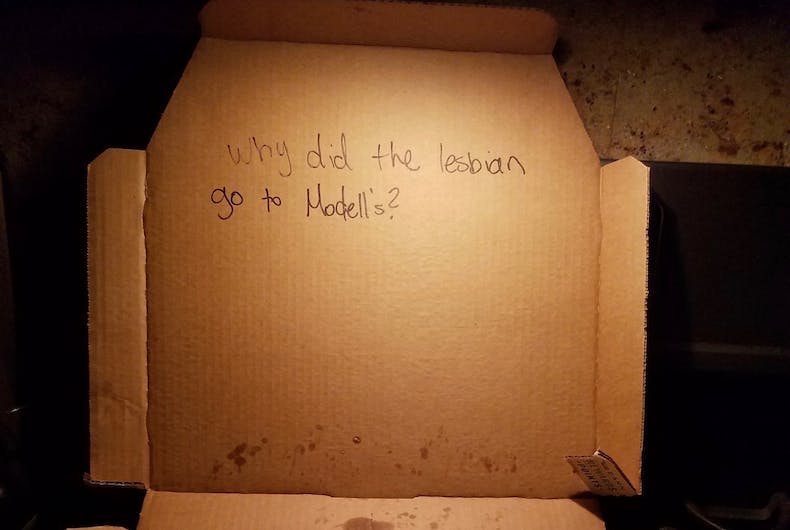 Lesbian couple Jennifer and Jeanine Nyx’s 15-year-old daughter had a sleepover with her friends in Stony Brook, New York, on Aug. 13, and ordered a pizza from a local Domino’s with the request that they write a joke in the box and have it delivered by a cute delivery driver. Innocent enough, but the message they ended up getting proved upsetting.

“Why did the lesbian go to Modell’s?” the top of the box reads. “Because she doesn’t like Dicks!!” the bottom portion said, along with, “P.S. If you like Dicks, HMU.” For those not up on their Internet slang, that stands for “hit me up,” or, in other words, call me. The driver included his phone number.

Modell’s is a sporting good stores with locations throughout the Northeast. Dick’s is a similar, rival brand.

“He had left a phone number. I was completely appalled at this joke and the comment,” Jennifer said, Gay Star News reports. “I just happen to be married to a woman and we were completely disgusted about the suggestive comment and the rude joke.”

She called the store and the manager apologized on behalf of the driver, who later called himself to apologize as well.

“At about 2 am, I received a private call from the driver apologizing. He said something like: ‘I did not realize they were young girls. I am married and have a child and I did not want to cheat on my wife. It was just a joke,'” she said.

She told them she was married to a woman and therefore found the joke especially offensive.

“We called the corporate office on Monday I found out that the driver is still working there. He made a recent delivery late at night to my daughter’s friend’s house,” she added. ‘To think that there is a possible predator delivering pizza with a well-known established pizza chain is unbelievable.”

Actor Vincent Rodriguez reveals he has a husband on Instagram