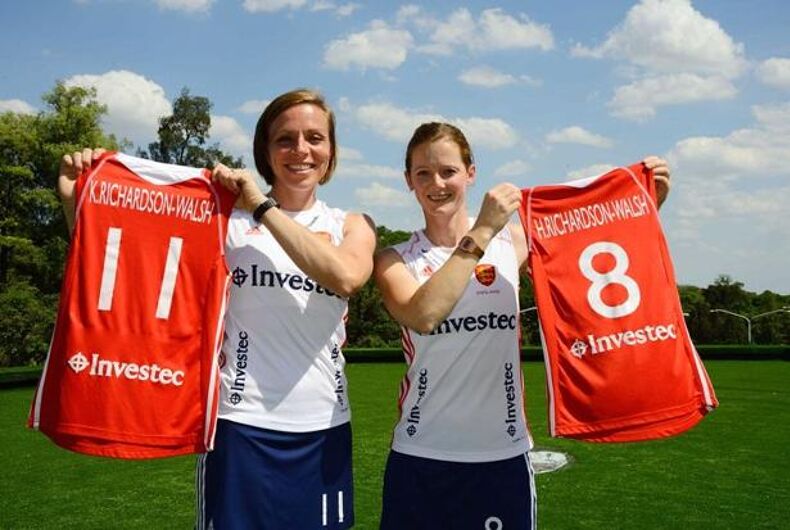 Two British women made history last weekend when they became the first married couple to play for the same team at the Olympics, Pink News reports.

Though the couple has been married for just three years, they have a long history together. Helen and Kate has been teammates for nearly two decades, and first starting dating eight years ago.

Since getting hitched in 2013, the couple has received nothing but support from their teammates, the couple told The Daily Mail. In fact, they invited the whole squad to celebrate their nuptials. Now, they say teammates have a particular appreciate for their sense of connection.

“If I do a bad tackle on Helen or if she’s skilled me there’ll be a bit more of an ‘ooohhh’ from the rest of the team,” Kate told The Daily Mail before the Olympics. ‘That’s how normal it is, it’s nice that we can laugh about it. In training recently Helen scored an amazing goal and it was very much the two of us who made it and one of our coaches said we’d become telepathic.”

But positive reception or no, the couple says it’s important for them to be out as athletes.

“We’re not out there shouting it, it’s just part and parcel of who we are,” Kate said. But Helen noted, when it comes to coming out, you can’t please everyone.

“If you are really open about it, people say, ‘Why do you make such a big deal about it?’” Helen added. “If you don’t mention it you could be seen as hiding it, which we didn’t want either.”

And while being gay isn’t the most important thing about them, the couple says they understand the positive impact of coming out publicly.

“Those messages we get from time to time have made it really pleasing that we have been so open,” Helen told The Sun. “When people say ‘you’ve helped me come out to my parents’ or ‘deal with my own sexuality’ it’s really powerful.”

But their historic Olympic moment that almost didn’t happen. Kate technically retired two years ago and Helen has faced multiple back surgeries in the past year. But they decided to come back for Rio.

“We won bronze in London and that was amazing. But ever since I’ve played this sport I’ve wanted to be a champion,” Helen told The Sun. “And I want to give it everything for Rio to try to do that.”