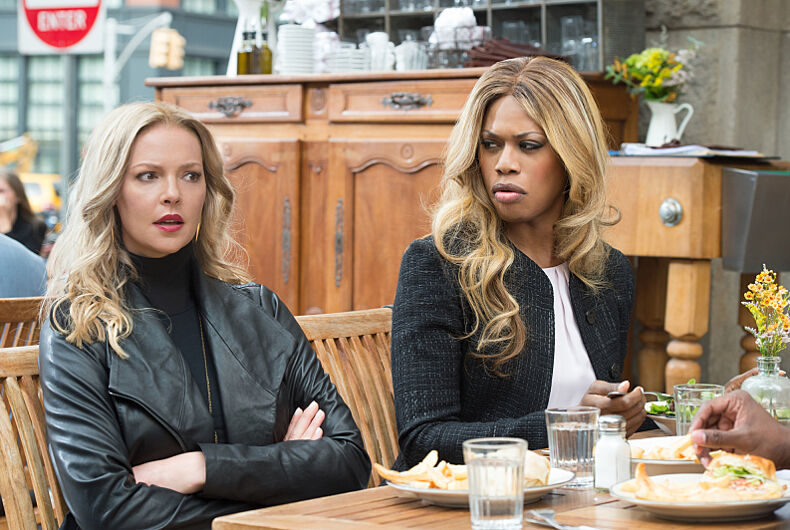 When award-winning actress Laverne Cox makes her broadcast television series debut this fall on the CBS courtroom drama, Doubt, alongside Katherine Heigl, she’ll be reunited with two friends who should be familiar to viewers of LGBTQ entertainment.

Actress, writer and producer Jen Richards — whose “Her Story” web series is up for an Emmy award next month — broke the news on Twitter this week in a response to a tweet from ACLU attorney Chase Strangio: that Richards and her costar Angelica Ross will appear in one of the first season episodes.

The show is brilliant. Oh, and @angelicaross & I have been cast to play her friends for one episode. @DoubtCBS https://t.co/econE0r6s6

Ross — actress, composer, and tech entrepreneur — has been friends with Richards for years, and both are friends with the “Orange Is The New Black” actress, but Richards tweeted that this was a surprise to the people behind the scenes of “Doubt.”

It's just one scene … so far. But if they like us, if you all like us, who knows, maybe they'll bring us back. @angelicaross @Lavernecox

Writer Mari Brighe joined the online conversation, pointing out that one of the writers on “Doubt” is an out trans woman, author Imogen Binnie.

That's right. And this on a flagship prime time drama on the single most popular tv network. @DoubtCBS https://t.co/hAIFStwEnO

Richards, who also appeared in the first season of Caitlyn Jenner’s E! docu-series, “I Am Cait,” is also the writer and driving force behind an upcoming video series, #Trans1o2, aimed at countering anti-transgender laws, policies and misconceptions.

Cox, who in 2014 became the first trans actress to be nominated for an Emmy, stars as transgender attorney Cameron Wirth in the CBS series set to debut this fall. Find out more the show here.

‘We were wrong. We will do better:’ Daily Beast pulls sleazy article