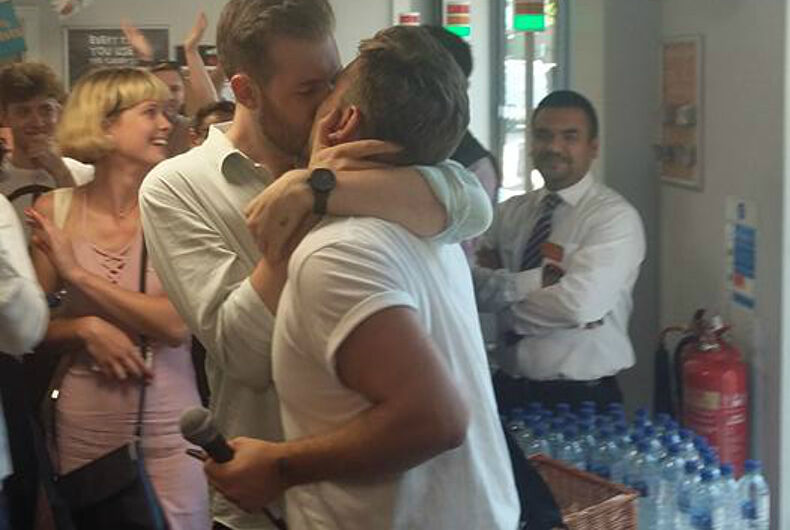 Nearly 200 protestors staged a kiss-in at a London store on Saturday.Photo: Dru Francalanza via Facebook

After a gay couple was told to leave a London store for holding hands, nearly 200 community members came together on Saturday to stage a kissathon in the store’s aisle, The Guardian reports.

Thomas Rees and his boyfriend Joshua Bradwell were reportedly told to leave after a customer complained that their display of affection was “inappropriate” and “immoral.”

“We were right to be holding hands because when someone questions your behavior in such a direct manner you can’t help but analyze how you are perceived by society,” Rees told The Guardian.

To add insult to injury, PinkNews reports that after Rees tweeted his dissatisfaction about the incident, the store tweeted back with an offer for a £10 voucher—the equivalent of about $13 US. But when word got out, the LGBTQ community came together to support the couple in much higher numbers than they had anticipated.

In a year that’s seen attacks all too often on the LGBT community, it’s high time that Sainsbury’s—with profits over £500 million this year—put their money where their mouths are and use their resources to ensure that homophobia becomes a thing of the past. a £10 voucher just doesn’t cut it.

For it’s part, the store says it supports the protest and is working to improve. It also provided some snacks for the demonstrators.

“It’s been a really great event and an important opportunity for the community to show their support,” a spokesperson from Salisbury told The Guardian. “We do our best to make sure everyone feels welcome in our stores but occasionally we make mistakes. We are working hard to make sure lessons are learnt.”

The soundtrack to the protest reportedly included gay icons like Diana Ross and Donna Summer. And, of course, plenty of same-sex kissing in the grocery aisles.

“When your community come behind and say ‘you were right and you are right,’ all that does is amplify your feelings,” Rees said. “We were right to complain and do what we’ve done and fight those people who said we were wrong.”

According to PinkNews, this isn’t the first time a customer has complained of homophobic treatment by Sainsbury staff. In 2014, a security guar reprimanded a lesbian couple for kissing.

Watch video of the event, captured by Paul Skrgatic, below.