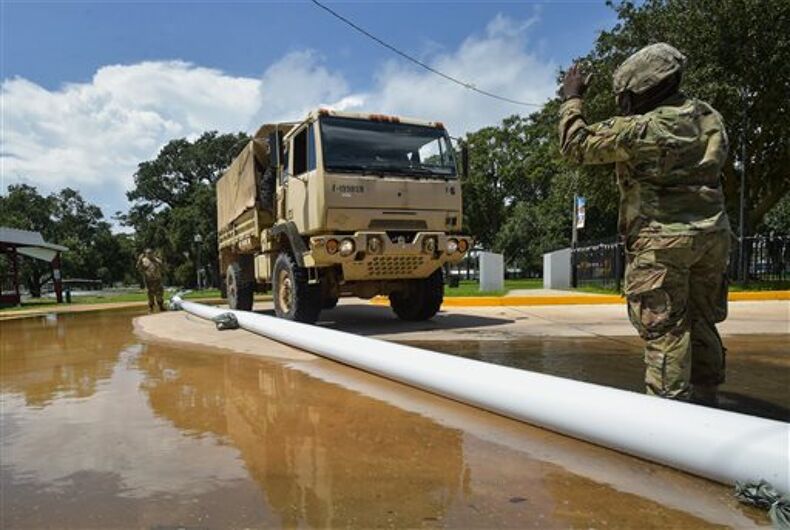 Lesbian, gay, bisexual, and trans people have long been held responsible by some Christian conservatives and Republicans for causing many of the greatest natural disasters of modern times.

For example, in May 1978, Anita Bryant, Florida Orange Juice queen and chief organizer of her so-called “Save Our Children” campaign to overturn a gay-rights ordinance of Dade County, called homosexuals “human garbage,” and blamed the drought then overtaking California on their sinful behavior. Ironically, however, just one day following the election of the first openly-gay San Francisco City Supervisor, Harvey Milk, and six months following Bryant’s claim, it started to rain.

On another side of the weather spectrum, others blamed the torrential winds, rain, and devastating flooding of hurricane Katrina in 2005 on LGBT people. Reverend John Haggee, evangelical pastor of a mega-church in Texas, was quoted in an interview in 2006 saying that “God caused Hurricane Katrina to wipe out New Orleans because it had a gay pride parade the week before and was filled with sexual sin.”

Televangelist Pat Robertson has most likely talked to God who told him of an upcoming calamity. After Orlando city officials voted in 1998 to fly rainbow flags high atop city lampposts during Disney World’s annual Gay Days events, Robertson issued a stern warning to the city:

“I don’t think I’d be waving those flags in God’s face if I were you. … [A] condition like this will bring about the destruction of your nation. It’ll bring about terrorist bombs, it’ll bring earthquakes, tornadoes, and possibly a meteor.”

Following the horrific events of September 11, 2001, Robertson, along with his conspiracy-theory evangelical buddy Jerry Falwell, reiterated past warnings. Falwell, with an air of righteousness, proclaimed on Roberson’s 700 Club on the Christian Broadcasting Network on September 13, 2001:

“I really believe that the pagans, and the abortionists, and the feminists, and the gays and the lesbians who are actively trying to make that an alternative lifestyle, the ACLU, People For the American Way, all of them who have tried to secularize America, I point the finger in their face and say, ‘You helped this happen!’” To this Robertson responded: “I totally concur.”

The cause for wide-spread and devastating health pandemics have also been laid at the feet of LGBT people. For example, Ronald Reagan, under whose presidency the AIDS pandemic was detected and spread, had not formally raised the issue until April 1, 1987 in a speech to a group of physicians in Philadelphia — a full seven years after the onset of AIDS in the United States.

The one and only time he publicly spoke of AIDS before 1987 was in his first year in office when he inferred that “maybe the Lord brought down the plague because illicit sex is against the Ten Commandments.”

Writing in 1986, Buchanan claimed: “The poor homosexuals — they have declared war upon nature, and now nature is extracting an awful retribution.” Also, back in 1983, Buchanan demanded that New York City Mayor Ed Koch and New York Governor Mario Cuomo cancel the Gay Pride Parade or else “be held personally responsible for the spread of the AIDS plague.” And later: “With 80,000 dead of AIDS, our promiscuous homosexuals appear literally hell-bent on Satanism and suicide.”

Some even fault gays for ultimately bringing about the total destruction of humanity itself. In his annual “State of the World” address at the Vatican delivered to diplomats from 179 countries, Pope Benedict XVI, on January 9, 2012, released a dire warning stating that marriage for same-sex couples “undermine the family, threaten human dignity and the future of humanity itself.”

The pontiff stated earlier on December 22, 2008 at a Christmas address to the Curia, the Vatican’s central administration, likening saving humanity from homosexual and gender-variant behaviors to saving the rain forest from destruction:

“[The Church] should also protect man from the destruction of himself. A sort of ecology of man is needed….The tropical forests do deserve our protection. But man, as a creature, does not deserve any less.”

But now, Ms. Bryant, Reverends Haggee, Robertson, and Falwell, Mr. Reagan and Buchanan, and Pope Benedict XVI, you better tell the queers to move over, for they no longer have a monopoly on bringing about world disasters. The gods have said “ENOUGH” to you Evangelicals and Republicans for your insane inquisitorial attacks.

As God tested Abraham (the patriarch of the Jews, Christians, and Muslims) by demanding that he kill his beloved son Isaac, hurricane Isaac returned in a deadly tumult to test the very moral character of the Republicans at their convention in Tampa in 2012. Could it be that the gods forced the Republicans to shorten their convention by one day for their evil transgressions against LGBT people?

And now, have the gods punished the rabidly anti-LGBT Tony Perkins, President of the so-called Family Research Council by flooding his home and Greenwell Springs Baptist Church in Louisiana where he is the interim pastor? Perkins has himself linked natural disasters to God.

Asked if he believed God was involved in the catastrophic deluge hitting Louisiana, which he described as a “flood of biblical proportions,” Perkins responded that “We’re gonna look for what God’s gonna do in this. I’m asking those questions and I’m going to see.”

Well, Tony and all others who profess that God(s) warns you about LGBT people, wait just a minute. Glory be, I think I hear God speaking. Yes, yes, yes indeed, she is telling me that I must notify you in no uncertain terms that you are all false prophets who profit by using your bigotry for your own personal advancement and enrichment.

By scapegoating and stereotyping LGBT people, you hope to fill your organization’s bank accounts and attract others to your causes.

If there is any lesson to learn from the spate of natural disasters hitting the globe, we as a collective human species, and not God(s), have the power to destroy or save our planet if we stand resolved to reverse our destructive and insane use of fossil fuels. Rather than blaming LGBT people, start to embrace science to save humanity from itself.