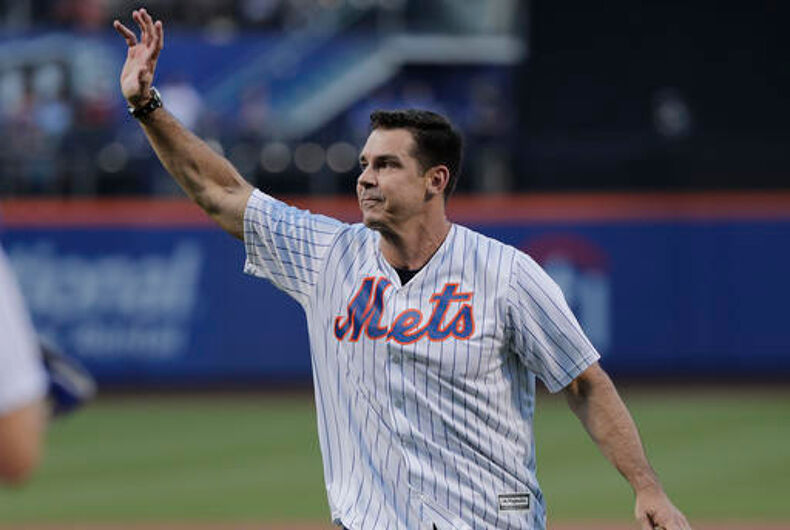 Former Major League Baseball player Billy Bean waves to baseball fans after throwing out the first pitch before the start of a baseball game between the New York Mets and the San Diego Padres, Saturday, Aug. 13, 2016, in New York. Bean threw out the pitch on the first Mets Pride Night. Photo: (AP Photo/Julie Jacobson)

Bean came out as gay after he left the Padres in 1995. Now he’s Major League Baseball’s vice president for social responsibility and inclusion. In the past two years, he’s talked to all 30 MLB ownership groups, various teams and players about struggling with his sexuality during his career and gay and lesbian inclusion in the workplace.

“The message is everyone is welcome that walks through the turnstiles to watch us play baseball,” Bean said. “The LGBT community is part of every community.”

Mets general manager Sandy Alderson approached Bean after he heard him speak to GMs in 2014. Since then, the former outfielder who had a six-year career with Detroit, the Los Angeles Dodgers and the Padres has participated in spring training, spoken with players and thrown batting practice. He’s helped former teammate and Mets coach Tommy Goodwin with the outfielders.

“(Alderson) wanted them to know about me,” said Bean, who grew up in Santa Ana, California. “My dad is a Marine Corps veteran, like Sandy. I grew up in a big family, very conservative. Lot of things that were explanations of why I chose to leave baseball as opposed to talk about what was going on with me.”

The Mets are among 10 teams hosting Pride Nights this season, and the first among the four New York men’s major pro sports to host the theme night. A portion of ticket sales will go to the LGBT Network, which promotes anti-bullying programs in the New York area.

Here are some things to know about Bean, who also talks to people in the front office, instructional leagues and minor leagues.

LIFE SKILLS: Bean says his job is to help younger players from all backgrounds and cultures understand workplace expectations. “A lot of people forget our players are 19, 20, 21 years old,” he said. “They’re world class baseball players, and they haven’t had time to learn all the ways of the world. We really prioritize messaging on life skills, domestic violence awareness and counseling about relationships. The inclusive conversation is a wonderful part of that comprehensive message.”

Bean says the comments in the clubhouse that “everybody’s been hearing for the last 500 years” will take time and education to reduce. “It was acceptable to be disparaging. When guys are ragging other guys, they feminize them. The comments were sexist as much as they were homophobic.”

TOUGH LESSONS: Bean says he quit baseball without talking to one person about why. “I had never come out to my family, I was living a very secretive, dark life,” he said. “My partner died of HIV-related causes on the eve of what was my last season.”

Brad Ausmus, the current Detroit Tigers manager, was Bean’s teammate and friend. He says Ausmus and his wife talk about how things “might have changed if I just would have told him. He would have said, ‘Don’t stop playing or just tell your parents or don’t tell your parents, just talk to us.’

“I didn’t realize there was a place for me in this world, and I didn’t even trust the people that loved me the most — my own family.”

Alderson was part of the Oakland organization when Glenn Burke, the first MLB player to publicly acknowledge he was gay, played for the Dodgers (1976-78) and Athletics (1978-79). Burke left the majors after receiving little playing time with the A’s. He died at 42 of complications from AIDS in 1995.

PROGRESS: Milwaukee Brewers minor league first baseman David Denson became the first active player in affiliated professional baseball to come out in August 2015. Bean says Denson called him for advice six months beforehand. “We made sure his parents were in the loop. I was surprised the day he did it. He texted me and said ‘You won’t believe what I just did.'”

Bean says it’s not the goal for baseball players to reveal their sexuality, but it’s important to provide a respectful workplace. Currently, there are no out active players in the NBA, NFL, NHL or MLB. “It’s a personal decision. That’s not going to be how I judge the work we’re doing.”

Former Met Daniel Murphy, a self-described Christian, said he disagreed with the “lifestyle” of people who are gay after Bean spoke to the team in March 2015.

PRIDE NIGHTS: Philadelphia has hosted Pride Night since 2001, and the Washington Nationals celebrated their 12th. Others with the theme night are the Chicago Cubs, Boston, Los Angeles, Oakland, San Francisco, Seattle and Tampa Bay.

Lou DePaoli, the Mets’ executive vice president and chief revenue officer, calls New York a “diverse and inclusive city” and says “we are particularly proud to welcome the LGBT community.”

Community organizations can propose theme nights to the marketing departments of MLB teams.

Bean says the Mets are sending “a great message not only to their fans, but for all of baseball.”

Watch: Why this gay man is abstaining from sex for a year