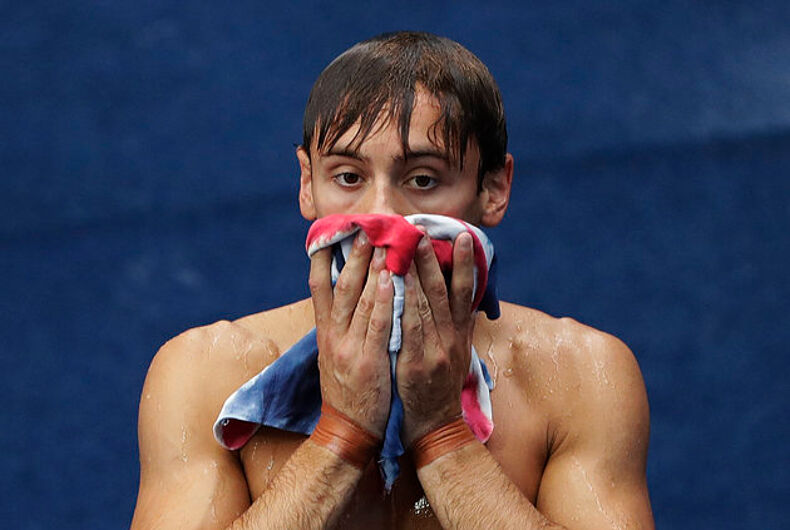 After a disappointing finish in the men’s 10m platform dive, British diver Tom Daley faced insults from a UK Christian advocacy group about his sexuality.

Christian Voice UK, which describes itself as “a UK-based prayer and lobby group praying for national repentance and working for godly government,” posted on Twitter following Daley’s 18th-place finish an failure to qualify for the final diving event that “turning gay” didn’t do Daley “any favours” at the Rio Olympics.

The group also attempted to cast doubt on the fact that Daley is truly gay, blaming the seduction of an “older man,” likely referencing Daley’s fiancée, filmmaker Dustin Lance Bass, who is 20 years his senior.

#Rio2016 And we need to remember that Tom Daley only went gay because he was seduced by an older man: https://t.co/lsbQT1Jo3Z

The response to the tweets was overwhelmingly negative, with commenters including author J.K. Rowling and a member of Parliament calling out the group’s un-Christian attitude, accusing them of “trolling for Jesus,” and even wondering if it was some kind of parody site.

For his part, Daley told reporters he’s already looking ahead to the 2020 Olympics.

“To think that Team GB diving has already got three medals from this Games is just incredible,” he said. “It definitely gives you a massive kick in motivation to want to stand on top of the podium in 2020.”

The group also tore into South African runner Caster Semenya, who has higher than levels of testosterone than the average woman and has faced criticism for appearing masculine, casting doubts on whether she should be allowed to compete with other women. Christian Voice went so far as to claim that Semenya is not a woman at all.

Why should 'intersex' athletes compete in women's events rather than men's? Sorry, Semenya, but it must be 'No'. https://t.co/eQ8r2Quup5

But the Twitterverse came to her defense as well, telling Christian Voice it isn’t really Christian and questioning how Jesus might respond.

The ultra-conservative Christian group has praised Uganda’s efforts to make homosexuality punishable by death, finds Pride celebrations “intimidating,” and the group’s leader Stephen Green was accused of violent domestic abuse and child abuse and neglect by his ex-wife.