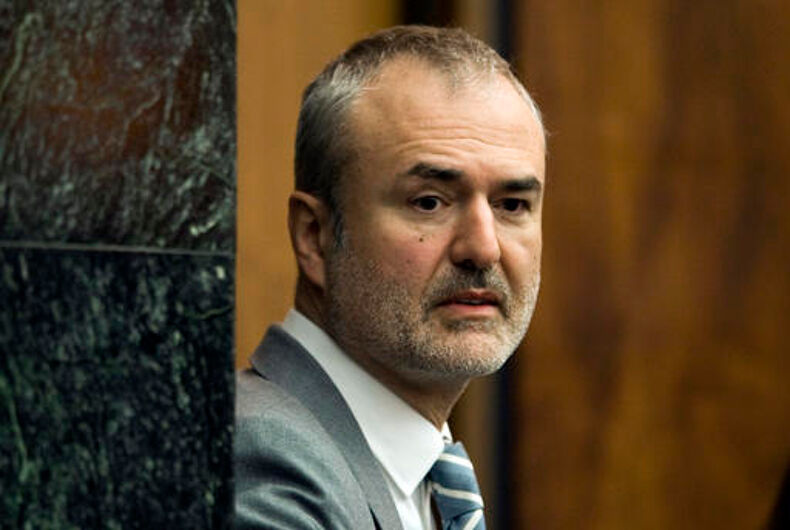 FILE - In this Wednesday, March 16, 2016, file photo, Gawker Media founder Nick Denton arrives in a courtroom in St. Petersburg, Fla. Spanish-language broadcaster Univision has bought Gawker Media in an auction for $135 million. That's according to a person familiar with the matter who asked not to be identified because the deal had not been formally announced. Photo: (AP Photo/Steve Nesius, Pool, File)

NEW YORK (AP) — Spanish-language broadcaster Univision won an auction Tuesday for Gawker Media, which was put on the block in the aftermath of a $140 million judgment against it in the Hulk Hogan invasion-of-privacy case.

Univision is paying $135 million for the online gossip and news publisher, according to a person familiar with the matter who asked not to be identified because the deal had not been formally announced.

Expanding from its Spanish-language base, Univision has been investing in media properties aimed at young people, including taking a stake in satirical website The Onion in January. In April, it said it was taking full control of Fusion, a TV channel and website aimed at English-speaking young people it had launched with ABC in 2013.

Univision outbid Ziff Davis, the owner of tech and gaming sites, in the auction for Gawker Media. They were the only two bidders, according to a person familiar with the bankruptcy auction. A judge must still approve the sale at a hearing Thursday.

Gawker Media properties include its namesake site, the women-focused Jezebel, tech-oriented Gizmodo and sports site Deadspin. Their breezy and often confrontational style has been influential in the publishing world.

But it filed for bankruptcy in June, about three months after Hogan won his lawsuit against the 14-year-old company. Gawker founder, Nick Denton, a former Financial Times journalist, also filed for personal bankruptcy.

Denton said Tuesday that the sale to Univision means “our employees are protected and will continue their work under new ownership — disentangled from the legal campaign against the company.”

Hogan, a former professional wrestler whose real name is Terry Bollea, sued over a tape posted by Gawker showing him having sex with a friend’s wife.

The case gained additional notoriety when it was revealed Silicon Valley billionaire Peter Thiel had secretly bankrolled Hogan’s lawsuit. Thiel was outed as gay by a Gawker-owned website in 2007.

Thiel’s role paying for the litigation against Gawker raised fears about the power of wealthy people to go after publications they dislike. Gawker argued in the Hogan case that it was protected by the First Amendment.