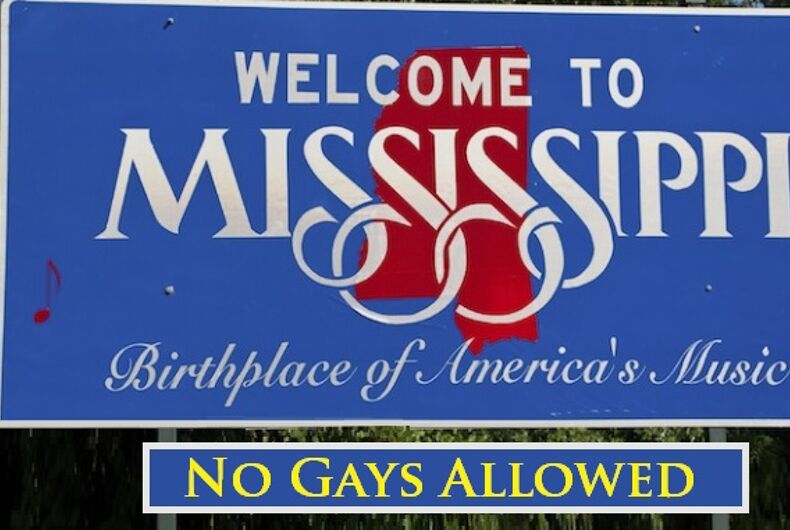 Editor’s note: On June 30, 2016, U.S. District Court Judge Carlton W. Reeves issued a preliminary injunction blocking the law. On June 23, 2017, the Fifth Circuit Court of Appeals lifted the injunction, thus allowing the law to go into effect. In January of 2018, the Supreme Court declined to hear the case. It is now law.

Mississippi residents and businesses now have a federal judge’s okay to begin denying wedding services to same-sex couples based on their religious objections, beginning July 1. And that’s just the beginning of what the so-called Hospitality State’s anti-LGBT law will do, from forcing women to wear skirts to restricting transgender students from using gender-appropriate bathrooms.

One more federal hearing is all that stands in the way of the law taking effect next month.

U.S. District Judge Carlton Reeves on Monday issued a four-page order, rejecting a motion for a preliminary injunction to stop the law from going into effect. Reeves wrote that would be inappropriate, since none of the lawsuit’s plaintiffs would be harmed by the law in the immediate future,

“Here, none of the plaintiffs are at imminent risk of injury,” Reeves wrote. Those plaintiffs include Mississippi residents Nykolas Alford and Stephen Thomas, a gay couple who the Huffington Post reports are engaged to be married within the next three years. The American Civil Liberties Union of Mississippi argued the law violates their 14th Amendment rights.

Also named in the lawsuit is at least one of the ACLU’s members, who court documents show is planning to marry a same-sex partner next year.

“We are reviewing the options and we will plan our next steps accordingly,” said Zakiya Summers, a spokeswoman for the ACLU of Mississippi.

Republican Gov. Phil Bryant signed the so-called religious freedom law, House Bill 1523, in April. Supporters of the measure declared businesses and individuals who want to exercise their religious views needed such a law in the wake of the Supreme Court’s decision, Obergefell v. Hodges, nearly one year ago, granting marriage equality in all 50 states.

“HB 1523 does not bar plaintiffs from getting married, exercising any right associated with marriage, or holding or living by whatever moral or religious beliefs they see fit,” the state attorneys wrote in their response to the ACLU lawsuit. “By its terms, HB 1523 is an accommodation law intended to convey the strongest protection for the ‘free exercise of religious beliefs and moral convictions’ permitted by the state and federal constitutions.”

The law would provide protection for people with three religious beliefs, according to the Associated Press: that marriage is only between a man and a woman, that sexual relations should only take place inside such a marriage and that a person’s “immutable biological sex” is determined by anatomy and genetics at birth.

Those notions will now carry the force of law, allowing county clerks to cite religious objections to recuse themselves from issuing marriage licenses to same-sex couples. Although HB 1523 specifies that a clerk must make other arrangements for such a license to be issued, lawmakers never addressed what would happen if every employee in a clerk’s office in a particular county declined to issue licenses.

In addition to marriage licenses, the law is anticipated to directly impact same-sex adoptions, employee business practices such as dress codes, and school bathroom policies.

Monday’s hearing specifically addressed the Campaign for Southern Equality’s motion to reopen its 2014 federal lawsuit in which Judge Reeves overturned Mississippi’s ban on same-sex marriage. Two other lawsuits will be the focus of a hearing Thursday, in which attorneys for theMississippi Center for Justice, the Campaign for Southern Equality and an Episcopal priest, the Rev. Susan Hrostowski, will deliver arguments seeking to stop HB 1523 from taking effect.