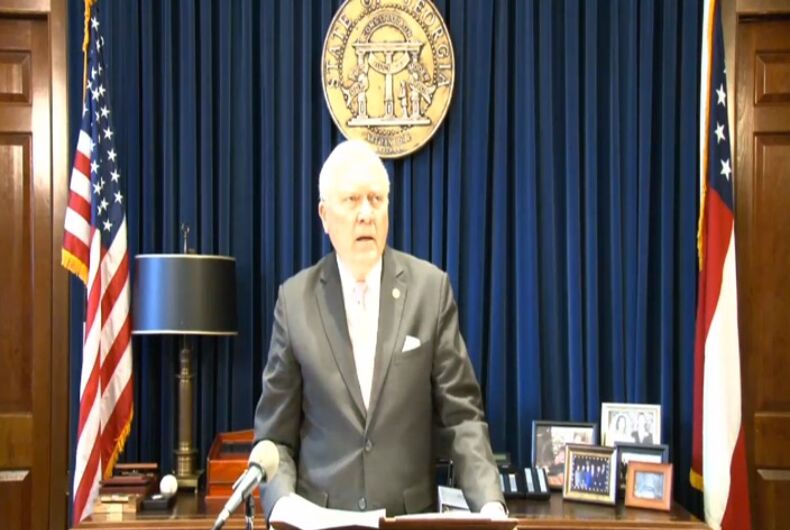 Governor Nathan Deal speaks at a press conference announcing he will veto a bill that would allow discrimination against LGBTQ people.Photo: Screengrab

At a press conference moments ago, Georgia Governor Nathan Deal announced that he will veto a bill that would allow discrimination against LGBTQ people. Numerous corporations and celebrities have denounced the bill and threatened to leave the state or abandon planned projects if the bill became law.

Hollywood has been particularly invested in the fight against the bill. Companies like Disney, Netflix, CBS, NBCUniversal, and Discovery joined forces with actors and producers like Aaron Sorkin, Ryan Murphy and Julianne Moore to oppose the legislation. Georgia offers Hollywood production companies huge tax breaks as an incentive to shoot in the state, which took in $1.7 billion last year in revenues from such companies.

Yesterday Chris Riley, chief of staff for the governor, emailed Spiro Amburn, a top aide to House Speaker David Ralston, to tell him that two large economic projects have abandoned plans to invest in the state.

“We received official notification this morning that Georgia was dropped from contention from two pending economic projects we had been working at [Georgia Department of Economic Development] prior to any decision being made on the bill,” Riley wrote according to the Atlanta Journal-Constitution. “Both projects cited HB 757 as why they were removing Georgia from consideration.”

Deal pointed out that several examples commonly cited by the religious right are overhyped and regularly misconstrued. He also pointed out the folly of religious believers insisting that their religious beliefs should take priority over others; generally known as small government supporters, Deal reminded them that the two positions are directly opposite from each other.

The Governor sternly told corporations that had threatened to pull up economic stakes from Georgia that he wasn’t responding to their threats, but instead was concerned about the reputation of the state.

“Today we feel very fortunate that LGBT people and people with living with HIV were spared the terrible consequences of HB 757,” Lambda Legal Southern Regional Director Simone Bell said. “We applaud today’s veto by Governor Deal and thank him for his willingness to listen to the voices explaining the damage this bill could have caused. In the end, Governor Deal did not allow hate and fear-mongering to dictate state policy; instead he chose to act reasonably and with compassion and demonstrated that equality is a Georgia value. He listened to the business community, hundreds of ministers, and tens of thousands of Georgians who opposed the bill. Freedom of religion does not give any of us permission to discriminate against others.”

“But this is far from over. LGBT Georgians need strong and effective protections in both employment and public accommodations — 21 states provide such protections against discrimination on the basis of sexual orientation and 17 on the basis of gender identity, and we need to add Georgia to the list.”

After passing similar legislation last year, Indiana faced economic sanctions and became the face of anti-LGBTQ discrimination for months. The state lost millions of dollars and is still recovering from the aftermath. Indiana legislators quickly passed a “fix” to the law that said it couldn’t be used to discriminate against LGBTQ people, but opponents say the law should never have become law if it requires repair immediately. Lawmakers failed to pass LGBT nondiscrimination protections earlier this year despite public support and pressure from business leaders and civil rights organizations.