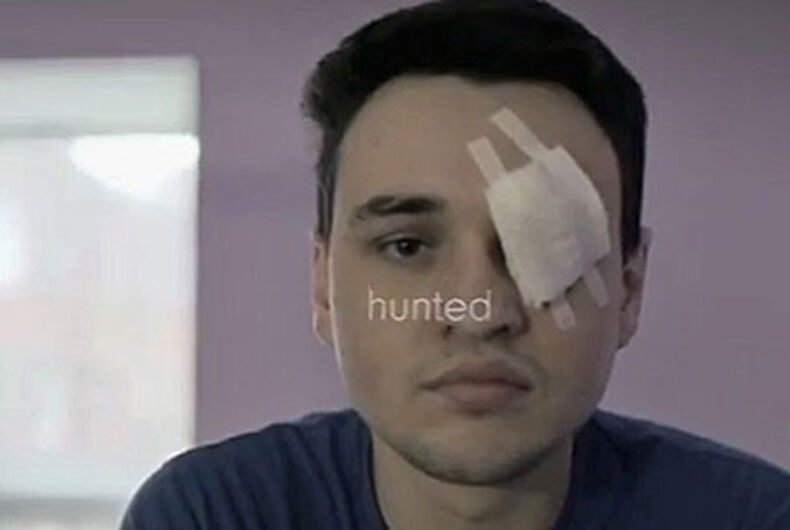 LONDON – Just days ahead of the opening of the Winter Olympics in Sochi, a new documentary airing Wednesday on Britain’s Channel 4 sheds new light on the violent, homophobic attacks on LGBT Russians.

The documentary, produced by freelance investigative journalist Liz MacKean, is titled “Hunted,” named for remarks made by one of the film’s subjects, Dmitry Chizhevsky, who was beaten and shot in the eye last November during an attack on the LGBTQ community center in St. Petersburg, Russia.

The broadcast focuses primarily on the anti-gay vigilante groups “Parents of Russia” and “Occupy Pedophilia,” which many gay rights activists and advocacy groups allege are given a license to promote anti-gay animus and attack LGBT Russians because of the country’s law banning the promotion of “non-traditional” relationships.

“The LGBT community in Russia has been turned into public enemy number one and the fact is they are hunted, they are assaulted, they are humiliated,” said MacKean.

“The LGBT community is being squeezed from the forces above by the government that passed the law, by comments from Putin, like saying that gay people are welcome in Sochi if they leave the children alone… its creating such a direct connection between pedophilia and homosexuality.”

The full video has been posted online.

On Tuesday, Human Rights Watch posted a collection of video clips documenting anti-LGBT violence that are being used by the groups to promote themselves online.

“What we see in those video are criminal offenses happening in the context of complete impunity,” said Human Rights Watch Tanya Cooper. “There is total failure on the part of Russia’s law enforcement to prosecute attack against LGBT people.”