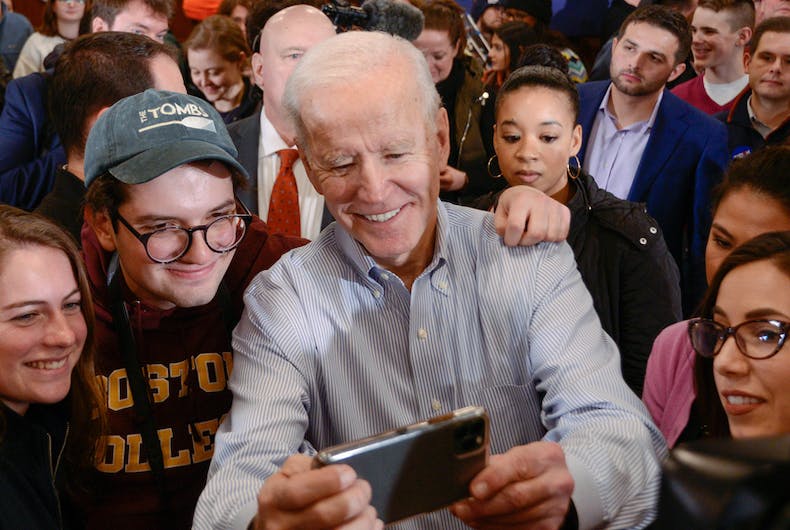 In response to news reports about the 10th trans person to be murdered this year, presumptive Democratic presidential nominee and former Vice President Joe Biden pledged via Twitter to end violence against trans women. In response, some right-wingers have lost their minds.

“We cannot be silent in the face of rising violence against transgender people of color—like the recent tragedies in Missouri and Puerto Rico,” Biden wrote in a May 10 tweet. “It’s our moral obligation to end this epidemic, and ensure everyone can live open and proud and free from fear.”

While numerous Twitter users supported Biden, a few right-wingers came out downplay violence against trans women while spouting off tired anti-trans talking points. One even sang an anti-trans rap song that was cringe-inducing to watch.

We cannot be silent in the face of rising violence against transgender people of color—like the recent tragedies in Missouri and Puerto Rico. It's our moral obligation to end this epidemic, and ensure everyone can live open and proud and free from fear. https://t.co/CPmqT4kYxe

This one “rapper” decided to sing about how “transgender women are men.”

You need to read the Bible, Mr. Biden. "Thou shalt not kill". But you should also read what it says about gay & lesbian (etc) lifestyles. HOW did it get into the U.S. Constitution? That part should be taken out.

Careful Joe, you're gonna upset a lot of centrists and a lot of republicans you're trying to reach out to. You can't make everybody happy. And your shallow pandering to an astronomically marginalized group of people won't be enough to bring the left under the tent to oust Trump.

Biden’s tweet came barely a week after the National Center for Transgender Equality (NCTE), one of the nation’s biggest trans organizations, endorsed Biden for president.

“Biden has a strong agenda for addressing the issues that face transgender Americans, a record of getting big ideas done during his time as Vice President in the Obama-Biden administration and a history of ensuring that transgender people are protected, including protections for transgender women as part of the reauthorization of the landmark Violence Against Women Act he authored,” said Mara Keisling, executive director of the NCTE Action Fund.

On his campaign website, Biden accuses the Trump administration of blocking trans people from openly serving in the military, proposing policies that allow federally-funded homeless shelters to turn away trans people, failing to address the epidemic of violence against transgender people—particularly transgender women of color—and undoing the protections for trans students and trans healthcare advanced by the Obama-Biden administration.

Among his listed policy solutions, Biden says he wants to reverse Trump’s trans military ban, include trans rights as part of the U.S. international human rights agenda, allow trans and non-binary Americans to use an “X” third-gender marker on their government IDs, restore the right of trans students to use bathrooms and locker rooms matching their gender identity, expand transition-related healthcare coverage, and pass a revised version of the 2019 Violence Against Women Reauthorization Act in order to add additional protections for trans people.

“With Joe Biden, we know we will be engaged, we will be seen, and we will not be erased,” Keisling said.