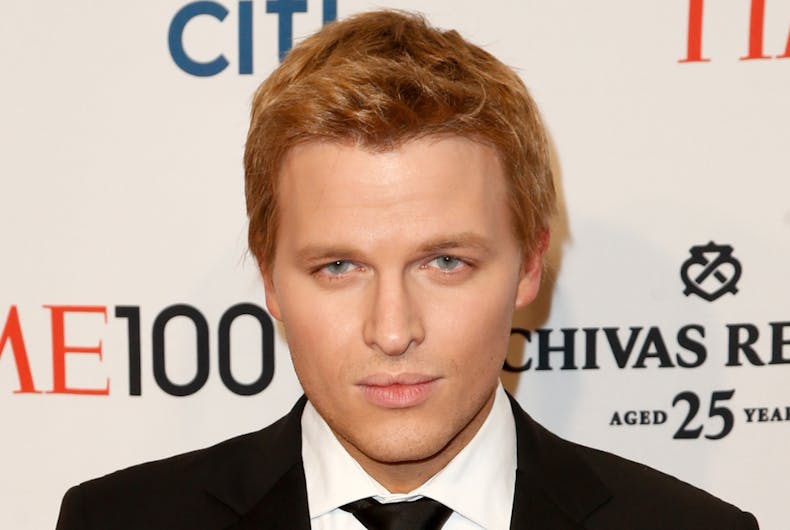 Ronan Farrow attends the Time 100 Gala for the Most Influential People in the World at the Frederick P. Rose Hall, Home of Jazz at Lincoln Center on April 29, 2014 in New York City.Photo: Shutterstock

Gay journalist Ronan Farrow has stepped forward, adding his own story after Jeff Bezos went public over National Enquirer parent company AMI threatening him with the release of personal photos. Bezos, the CEO of Amazon and the owner of the Washington Post, accused AMI of blackmail and extortion in a post released yesterday on Medium.

Farrow, the child of Mia Farrow and Woody Allen, has been partnered to speechwriter and television producer Jon Lovett since 2011.

The source for the photos is likely Sanchez’s brother Michael Sanchez, a gay Trump supporter.

The Washington Post had speculated that the National Enquirer may have deliberately chosen to strike out at Bezos, due to both Bezos’ and his newspaper’s criticism of Trump and the president’s ties with AMI. With yesterday’s post by Bezos, this connection becomes far clearer.

In the post, Bezos details a blackmail attempt over a series of photos, including one that Dylan Howard, the Chief Content Officer of AMI, referred to in an email published by Bezos, as a “below the belt selfie — otherwise colloquially known as a ‘d*ck pick.'”

An additional nine images were touted by Howard, including a “selfie” in which Bezos is wearing nothing more than a towel, as well as scantily-clad photos of Sanchez.

The implication on the email was that these photos would be damaging to Bezos, and would serve as insurance against the Washington Post publishing “unsubstantiated rumors” about the National Enquirer.

Bezos’ post goes into more details on the extortion attempt on AMI’s part, and adds that others have also contacted his team to say that they too have faced similar issues with AMI.

With a series of tweets, Ronan Farrow shared his own experiences with the National Enquirer parent, sharing that that he also faced a similar extortion attempt.

“I and at least one other prominent journalist involved in breaking stories about the National Enquirer’s arrangement with Trump fielded similar “stop digging or we’ll ruin you” blackmail efforts from AMI,” said Farrow via twitter, adding, “I did not engage as I don’t cut deals with subjects of ongoing reporting.”

I and at least one other prominent journalist involved in breaking stories about the National Enquirer’s arrangement with Trump fielded similar “stop digging or we’ll ruin you” blackmail efforts from AMI. (I did not engage as I don’t cut deals with subjects of ongoing reporting.) https://t.co/kHQdWIkVjV

It was Farrow who exposed the sexual abuse allegations again Harvey Weinstein, helping to spark the #MeToo social media movement that has exposed similar allegations around the world.

Farrow had also written a piece for the New Yorker about Weinstein’s attempts to squash these allegations — which included the aforementioned Dylan Howard collaborating with Weinstein to discredit his accusers.

Farrow also wrote an article for the New Yorker about AMI, and their use of “catch and kill” tactics to buy stories involving people the company favored. One such example was AMI’s $150,000 payment to former Playboy model Karen McDougle to stop a story about her alleged affair with then-candidate Donald Trump.