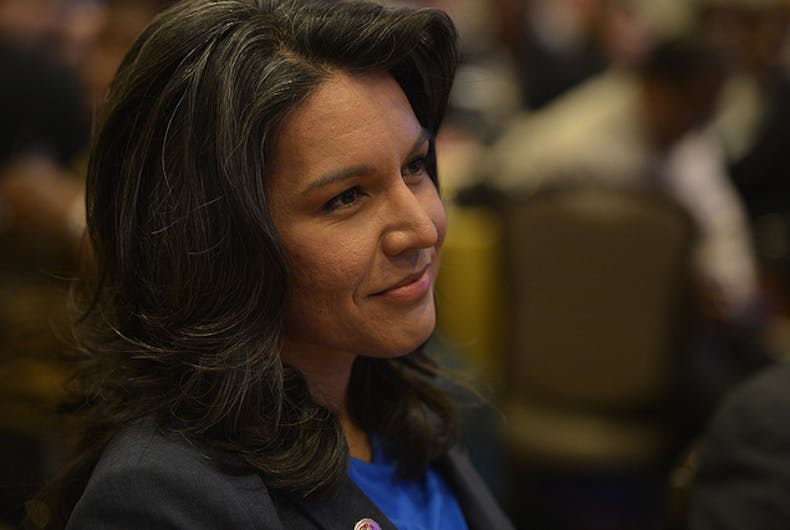 Tulsi Gabbard has declared her candidacy for the Democratic presidential nomination. Unless you’re a political junkie or Hawaii resident, you’ve probably never heard of Gabbard. By any definition, she’s the first fringe candidate to throw her hat in the party ring, starting with her past as a full-throated homophobe. Here’s a handy guide to her candidacy.

Related: Also check out our guides for Elizabeth Warren and Julián Castro

Resumé. Gabbard is a four-term congresswoman from Hawaii. She served in Iraq as a member of the Hawaii State National Guard. She was vice chair of the National Democratic Committee, resigning in early 2016 to endorse Bernie Sanders’ presidential bid.

That’s the normal part of Gabbard’s background. Her most visible act in Congress was meeting secretly with President Bashar al-Assad ona trip to Syria two years ago. As if meeting with one of the most bloodthirsty dictators in the world wasn’t bad enough, Gabbard’s trip was paid for by a little known Arab-American advocacy group, which led to an ethics issue. Eventually, she resolved the issue by paying for the trip herself.

Then there’s her history on LGBTQ issues (see below).

Why she’s running, in her own words. “There are a lot of reasons for me to make this decision. There are a lot of challenges that are facing the American people that I’m concerned about and that I want to help solve.”

Her campaign theme. Gabbard says that she’s going to make “war and peace” her primary issue.

Her LGBTQ record. We can safely say that Gabbard will be the only Democratic candidate who not only has a professional homophobe for a father but who followed in his footsteps for a chunk of her career.

She’s the daughter of Mike Gabbard, who founded Stop Promoting Homosexuality America 20 years ago, when Hawaii was on the verge of becoming the first state to legalize marriage equality. Gabbard’s efforts succeeded, and he rode his activism to a seat in the state legislature, where he continued to oppose marriage equality.

Tulsi Gabbard began her career echoing her father. It’s one thing to say that you oppose marriage equality. It’s entirely another to engage in vicious rhetoric, which Gabbard did.

“As Democrats we should be representing the views of the people, not a small number of homosexual extremists,” Gabbard herself said as a state legislator. She accused someone questioning her father’s ties to Hare Krishna of “acting as a conduit for The Honolulu Weekly and other homosexual extremist supporters of Ed Case [Mike Gabbard’s opponent].”

Just nine years later, Gabbard was among the Hawaii Congessional members calling for the state to pass marriage equality. She attributes her turnabout to her experience serving in the military, but it’s worth pointing out that Gabbard would’ve been hard pressed to keep returning to Congress from deep blue Hawaii as an unrepentant homophobe.

She continues engaging in dog whistles. Recently, she accused fellow Democrats of “fomenting religious bigotry” against Catholics. The immediate issue was Democratic questioning of judicial nominee Brian Buescher, who is a member of the Knights of Columbus, a Catholic fraternal group with a history of anti-LGBTQ advocacy.

Pros to her candidacy. Gabbard is young (37). She also fits the party’s increasingly diverse base because of her Samoan descent. She may also appeal to fellow progressives. But if her former candidate, Bernie Sanders, is in the race, it’s hard to see her getting much traction.

Cons to her candidacy. Where to begin? Her homophobic past is a big issue, as is her bizarre meeting with Bashar al-Assad. Just to top it all off, Gabbard is viewed as rogue by many of her fellow Democrats. Right now she’s engaged in a battle with fellow Democrat and Hawaiian, Sen. Mazie Hirono, which isn’t the way to build support for your campaign.

Odds. Less than zero. Between her track record on LGBTQ issues (even after her change of heart), her willingness to meet with a brutal dictator and unnecessary battles with her own party leaders, Gabbard is going nowhere.