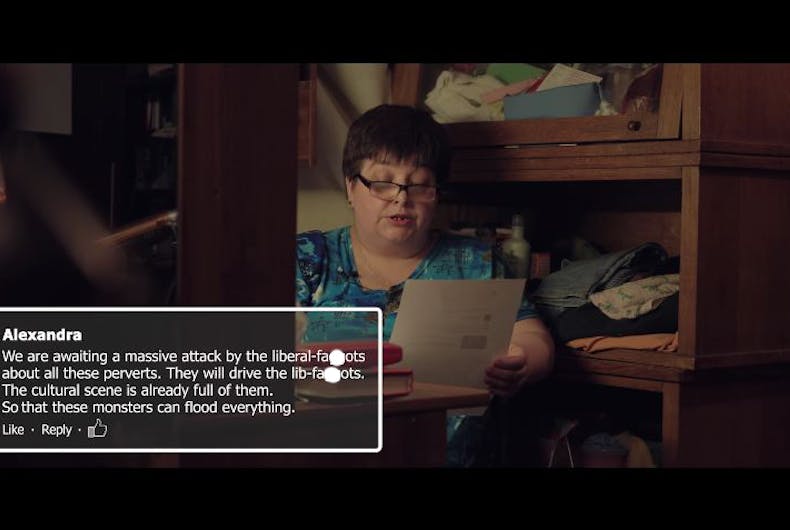 Homophobic troll reads her hateful comment in the documentary "The Internet Warriors." Photo: Screenshot, The Guardian

Internet trolls are everywhere, puffing out their chests, working their little fingers to the bone while making disparaging comments, sometimes hiding behind a screen name and sometimes not.

Anyone who has spent too much time in the comments section knows that feeling of wishing you could see who is on the other side of that mean tweet, or racist and misspelled rant. Perhaps you could better understand what made them that way and what motivates them? Or maybe you just want to shake them and ask what’s wrong with them?

Related: The vital lesson this story of fleeing the Westboro Baptist Church can teach you

A new 20-minute documentary by Kyrre Lien for The Guardian is an intimate, inside look at the personalities behind the hate.

The subjects in this fascinating, and at times hard to watch, short film come from different countries and have different targets, with various motivations for going after those individuals and groups.

Whether it’s a Syrian refugee with a bone to pick with America, a Trump supporter who has a problem with anyone and everyone who doesn’t also back the man, or a homophobic woman whose 75-year-old mother is up to similar behavior, they all read their old hateful remarks and get surprisingly candid.

They also refuse to apologize for their behavior. Many of them laugh as they reminisce over their old outbursts and then defend their worldview.

It isn’t easy viewing, but understanding what motivates such vitriol is more necessary now than ever.

Watch the doc, called The Internet Warriors, below.