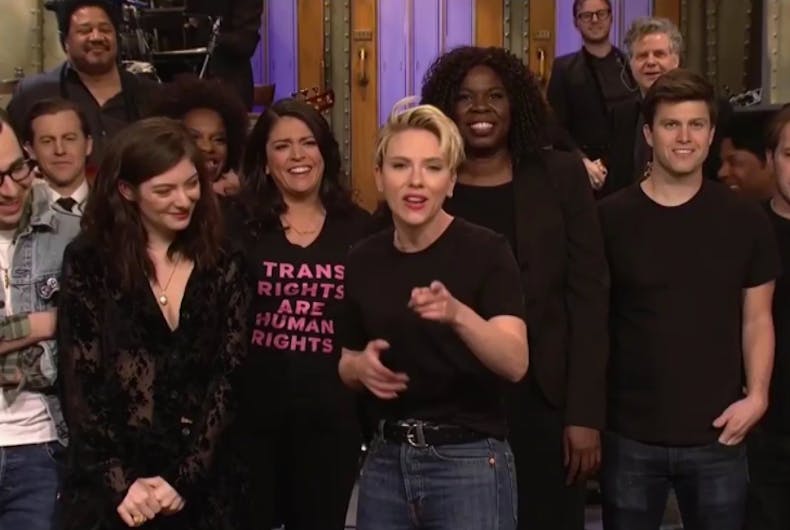 SNL ripped into Logo’s new gay reality show Fire Island last night, contrasting its painfully stereotypical portrayal of gay men with its own Cherry Grove, “about a group of affluent lesbians one beach away.”

True to Fire Island’s example, Cherry Grove draws from some of the most tired stereotypes about lesbians — that they are boring, sexless, lactose-intolerant kale-eaters who spend all their time “processing.”

The sketch begins by transitioning from images of half naked men partying on the beach to a scene of lesbian moms holding crying babies on the couch.

(Clearly, SNL’s writers have never been to The Dinah Shore Weekend.)

Later, the women sing a capella to Annie Lennox’s “Why” around the dinner table. Other scenes include large quantities of kale and emotional processing in bed (“I just need you to see me…”).

Cat fights between drama queens are contrasted with women using “I statements” in a disagreement about parenting styles. And while the boys are out partying, the ladies are trying to put infants to bed.

“Excuse me sir, can you please lower your jazz?” Kate McKinnon’s character pleads with an unseen neighbor shortly before 9 pm. “There are five miracles of home water births asleep in this house.”

Host Scarlet Johansson also parodied her own Dolce & Gabba fragrance ads with a spoof for “Complicit: the fragrance for the woman who could stop all this ― but won’t” targeting Ivanka Trump.

And what would SNL be without one of Kate McKinnon’s brilliant impressions of Attorney General Jeff Sessions?

But the icing on a big queer cake was a subtle moment during the credits, when cast member Cicely Strong took creative liberties with the “everyone wear black” rule and showed her support for the transgender community by standing front and center in a “Trans rights are human rights” T-shirt.

? to Cecily Strong for putting herself front and center during SNL credits, using platform to promote trans rights pic.twitter.com/mJzffJWp79