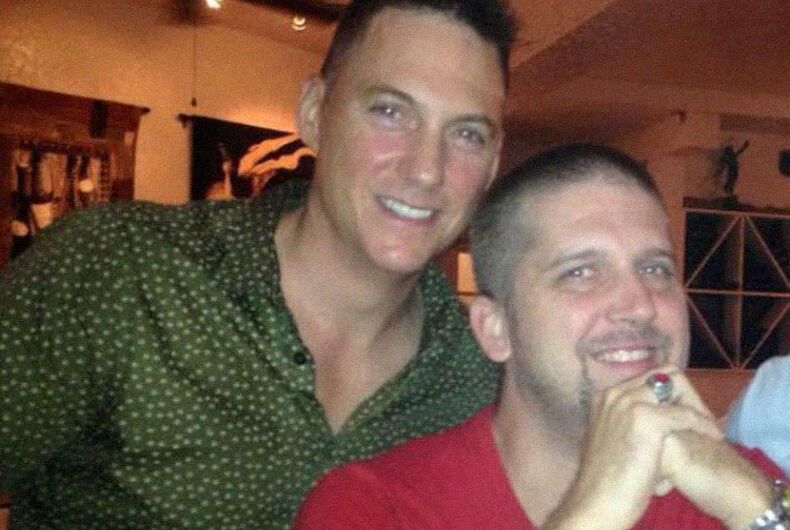 Kevin Seymour and Kevin Price were victims of an antigay attack in Key West by a Trump supporter. Photo: Facebook

An arrest has been made in the case involving a man running down a gay couple in Key West, Fla., on his scooter while yelling anti-gay slurs and pro-Trump rhetoric.

The Key West Police Department said Brandon Ray Davis, 30, was taken into custody on Wednesday by the Onslow County Sheriff’s Office, in North Carolina on an “extraditable warrant” for felony aggravated battery, reports the Miami Herald.

Davis lives in Richlands, N.C. The incident occurred on Feb. 23.

The couple, Kevin Seymour, 38, and Kevin Price, 49, were riding bikes when Seymour yelled out to the man suspected to be Davis to warn him that he almost hit a car. He then turned around and began insulting them with statements like, “I bet you faggots voted for that bitch Hillary” and “You live in Trump country now,” before turning physically violent.

Police were able to use the tag on the man’s scooter to trace it back to a rental shop, which then in turn traced it back to Davis. Price and Seymour, plus another eyewitness, were able to then pick him out of a photo lineup.

Because he yelled out homophobic slurs during the attack, and because it was not provoked by Price or Seymour, Davis is facing increased penalties, as the violence is being considered a hate crime.

“Probable cause exists to believe there was evidence of prejudice in Davis’s attack of Seymour,” the warrant for Davis read, as he “used explicit bias language in reference to their sexual orientation” and went after Seymour “without any provocation.”