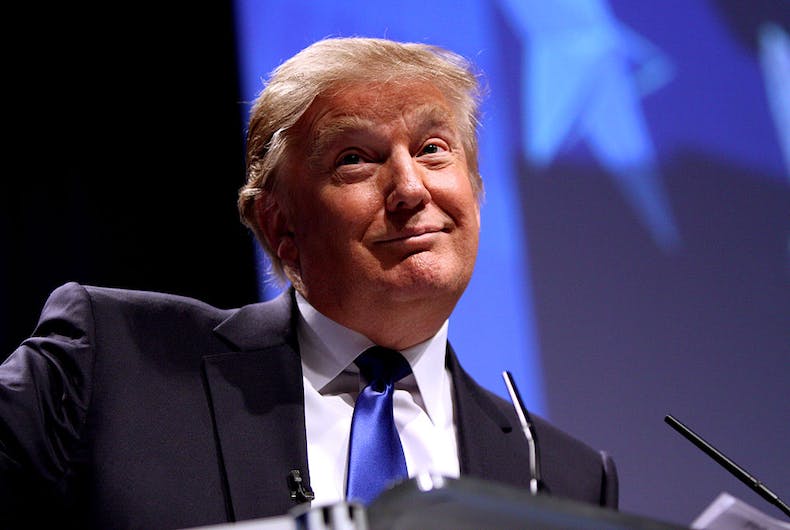 A leaked copy of President Trump’s upcoming “religious freedom” executive order shows that the administration plans to give the religious right a license to discriminate against LGBT people. The order, titled “Establishing a Government-Wide Initiative to Respect Religious Freedom,” is worse than anything you feared.

The Nation first published the draft text and a separate copy was reviewed by LGBTQ Nation. The draft language is currently being widely circulated on Capitol Hill and among LGBTQ organization staff.

Earlier this week, responding to a report by LGBTQ Nation that the Trump administration may be planning to implement an executive order that would be a license to discriminate on the basis of “religious freedom,” The White House said only that there were no immediate plans to do so, followed by a statement pledging not to overturn former president Barack Obama’s executive order protecting LGBTQ federal employees. It left open the possibility for a “religious freedom” executive order that would provide a carve out to those protections.

The order would effectively nullify all existing protections for LGBT people. President Trump wouldn’t need to specifically repeal the Obama order because the new one would supercede it.

“The provisions of this order shall prevail in cases of conflict with any existing executive order and with any future executive order unless such future order explicitly refers to, and limited or excludes, the application of this order,” the text reads. “All agencies shall promptly withdraw or rescind any rulings, directives, regulations, guidance, positions, or interpretations that are inconsistent with this order to the extent of their inconsistency.”

The administration could use the order to gut civil rights laws, allowing people and organizations to cite religious objections to same-sex marriage, gender identity, premarital sex, and abortion. The order would cover  “any organization, including closely held for-profit corporations” “when providing social services, education, or healthcare; earning a living, seeking a job, or employing others; receiving government grants or contracts; or otherwise participating in the marketplace, the public square, or interfacing with Federal, State or local governments.”

The order would also restrict women’s right to contraception and abortion under the Affordable Care Act. Churches and charitable organizations would be allowed to be directly political without losing their tax exempt status if the group “believes, speaks, or acts (or declines to act) in accordance with the belief that marriage is or should be recognized as the union of one man and one woman, sexual relations are properly reserved for such a marriage, male and female and their equivalents refer to an individual’s immutable biological sex as objectively determined by anatomy, physiology, or genetics at or before birth, and that human life begins at conception and merits protection at all stages of life.”

The order is expected to be revealed tomorrow morning at the National Prayer Breakfast. Hopefully, it won’t be as truly horrifying – and unconstitutional – as this leaked draft version.

“The leaked draft of Donald Trump’s License to Discriminate order is sweeping and dangerous,” Human Rights Campaign President Chad Griffin said. “It reads like a wishlist from some of the most radical anti-equality activists. If true, it seems this White House is poised to wildly expand anti-LGBTQ discrimination across all facets of the government — even if he does maintain the Obama EO. If Donald Trump goes through with even a fraction of this order, he’ll reveal himself as a true enemy to LGBTQ people.”

Full text of the leaked document is after the page break.

Violent attacks on gay men under investigation in Columbus & Nashville