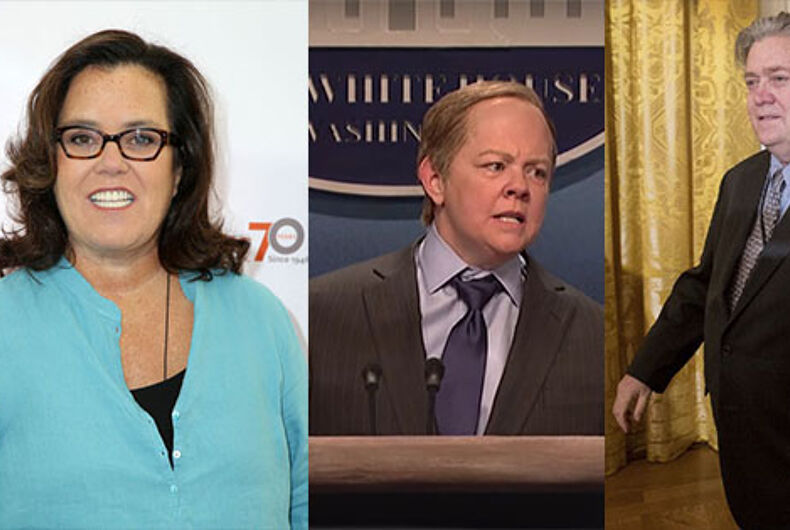 The only news that could possibly top the hilarious send-up of Trump spokesman Sean Spicer, as performed by Melissa McCarthy last weekend, is the concept that Rosie O’Donnell might play White House chief strategist Steve Bannon in an upcoming episode of NBC’s Saturday Night Live.

The very suggestion that Donald Trump’s longtime nemesis might contribute to the weekly spoofing of his presidency by Alec Baldwin and, now, McCarthy, was enough for big headlines and to give Twitter a fit… of joy. And O’Donnell herself was happy to help feed the rumormill.

But the fun of Monday night gave way to harsh reality Tuesday morning, as O’Donnell brushed away the thought as “just a funny idea.”

“But what an idea, especially in the light of a report in Politico that suggests what really bugged the president on this week’s SNL wasn’t McCarthy’s surprising tour de force as White House spokesman — it was that a woman was cast to play him.

“More than being lampooned as a press secretary who makes up facts, it was Spicer’s portrayal by a woman that was most problematic in the president’s eyes, according to sources close to him. And the unflattering sendup by a female comedian was not considered helpful for Spicer’s longevity in the grueling, high-profile job, where he has struggled to strike the right balance between representing an administration that considers the media the ‘opposition party,’ and developing a functional relationship with the press.’

“’Trump doesn’t like his people to look weak, ‘added a top Trump donor.

“Trump’s uncharacteristic Twitter silence over the weekend about the “Saturday Night Live” sketch was seen internally as a sign of how uncomfortable it made the White House feel. Sources said the caricature of Spicer by McCarthy struck a nerve and was upsetting to the press secretary and to his allies, who immediately saw how damaging it could be in Trump world.”

Given his fixation on appearances, writes the Washington Post, “It’s no surprise then — or it shouldn’t be any surprise — that Trump’s main takeaway from “Saturday Night Live” was not the show’s sendup of Spicer’s poor treatment of reporters or his bullying tactics but rather the fact that a woman was impersonating the press secretary rather than a man.”