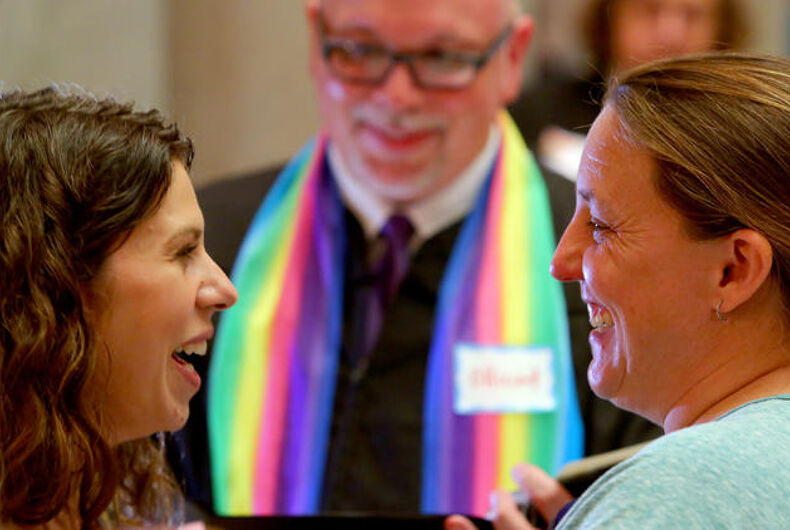 Arkansas will hold a hearing tomorrow to petition Congress to add an amendment to the U.S. Constitution defining marriage as between one man and one woman.

Republican Senator Jason Rapert filed the bill, Senate Joint Resolution 7, earlier this month that would prohibit states from accepting any definition of marriage “except as the union of one man and one woman, and no other union shall be recognized with legal incidents thereof within the United States or any place subject to their jurisdiction.”

Rapert has been active on social media in the wake of filing his bill, tweeting out message of support for his effort as well as publicly feuding with a gay constituent who disagrees with his attempts to roll back LGBTQ rights.

Thanks to all those reaching out with support. I remain committed to standing for what is right – forever. #arpx @AnAppeal2Heaven pic.twitter.com/SRfqyEC929

In an interview with KATV, Rapert noted it would take 34 states to call for the constitutional convention to propose the marriage amendment and 38 for the amendment to become part of the Constitution. He believes there is a chance this could happen, he said, claiming the “silent majority” spoke in the 2016 election and that “they’re going to speak again.”

Rapert also recently filed a bill asking for a constitutional convention calling for an amendment to ban abortion in the U.S., “providing that every human being is entitled to the right to life.”

He also seems to be selective in his preference for state over federal law, as he is attempting to slow down the progress of the Arkansas Medical Marijuana Amendment. He points out that federal law trumps state law.

When asked if this was hypocritical he threatened to end the interview with KATV, accusing them of having an agenda.

“There is no hypocrisy in standing up for what you believe in,” he eventually answered. “It is not bigoted to say that marriage is between a man and a woman.”

Tennessee also recently introduced legislation that would require the state to only recognize marriages between one woman and one man and to ignore the Supreme Court decision, Obergefell v Hodges, that made same-sex marriage the law of the land.