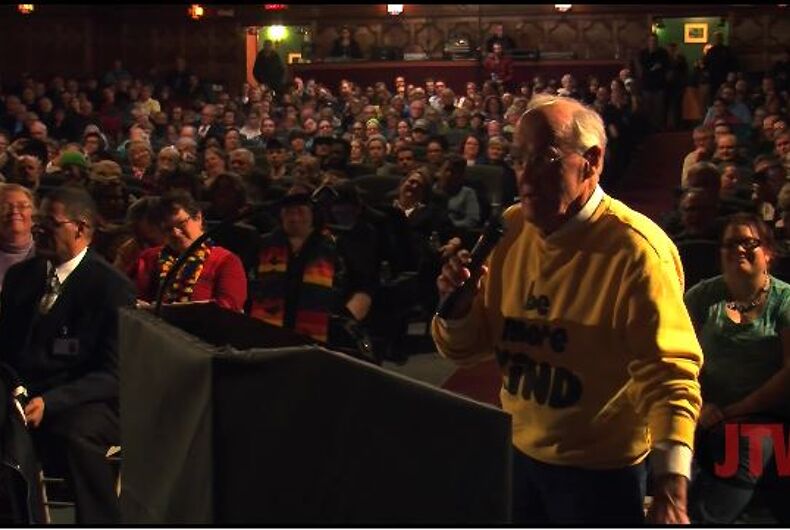 Retired educator Don Tassie, 81, turned up at the Jackson City Council meeting in Michigan on Tuesday with a prepared speech on a proposed non-discrimination ordinance that would give protections to the LGBTQ community.

He sat listening to those speaking for and against, many mirroring comments he intended to make himself, and decided to take a more novel approach to voicing his support for equal rights.

Tassie approached the podium, wearing a bright yellow sweater reading, “Be more kind,” and launched into a rap he wrote several years ago as part of a campaign to spread kindness throughout the community.

My friends, they call me Mr. T

I hear all kinds of folks who say,

Amen! Inside out, just what are you talking about?

I say, listen up, friends, I’ll tell it like it is

To you, to me, most every day

Is what we all need to do

So don’t be afraid, don’t be shy

Come on now, let’s give it a try

Whoever you are, wherever you’ve been

It’s time for us to all be friends

Let’s do the right thing, let’s pass this NDO

The ordinance did in fact pass, with a 5-2 vote, after a meeting that lasted nearly six hours.

“I thought it would be closer than that,” Tassie told Michigan Live. “We got people’s human rights protected. This is not a religion thing.”

He said he became involved with the LGBTQ community after a lesbian couple helped him through his mourning when his wife, Tuey, died in 2001.

“They are my dearest best friends after that,” Tassie said. “How could I deny them, my friends, the same rights that I have?”