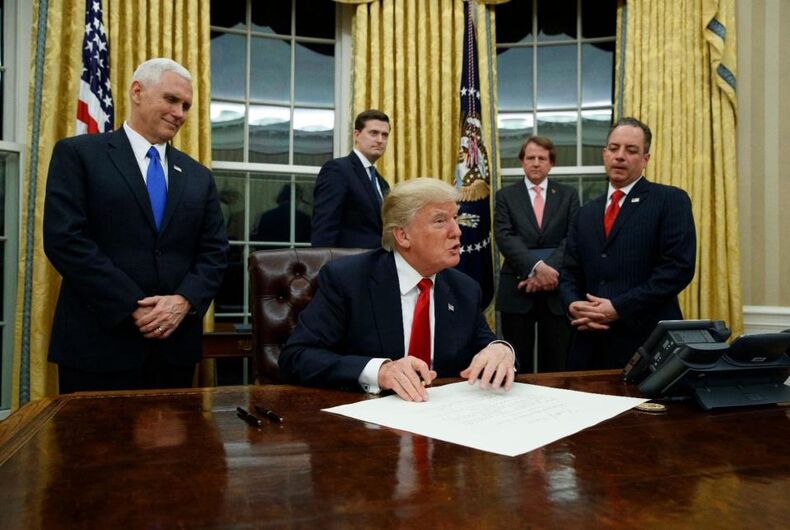 Making it harder for other people to access abortion because you are morally opposed to it is not religious freedom.Photo: AP Photo/Evan Vucci

As we previously reported, sources have said an executive order from President Donald Trump that would allow for discrimination against the LGBTQ community could be coming this week.

Press Secretary Sean Spicer was asked by a reporter from the Washington Blade if a religious freedom, anti-LGBTQ executive order was in the works, and he declined to answer.

“I’m not getting ahead of the executive orders that we may or may not issue,” Spicer said. “There’s a lot of executive orders, a lot of things the president has talked about and will continue to fulfill, but we have nothing on that front now.”

A White House spokesperson has also responded to NBC News by email, seeming to deny the reports.

“As Sean said in the briefing today – we don’t want to get ahead of the EO/As [executive orders and actions] that are coming, but that isn’t the plan at this time,” White House Deputy Press Secretary Stephanie Grisham wrote.

“The rumors of an anti-LGBTQ executive action by President Trump are deeply troubling,” JoDee Winterhof, the Human Rights Campaign‘s Senior Vice President for Policy and Political Affairs, told LGBTQ Nation in an emailed statement. “We already know that he is willing to target and marginalize at-risk communities for his perceived political gain. As the President and his team plan their next steps, we want to make one thing clear: we won’t give one inch when it comes to defending equality, whether it is a full-on frontal assault or an attack under the guise of religion. Mike Pence should know that better than anyone given his track record in Indiana.”

Meanwhile, there is still concern over the First Amendment Defense Act (FADA), which would allow for discrimination against the LGBTQ community in much the same way this rumored executive order would, in areas such as private business, healthcare, employment, and housing.

Unlike an executive order, FADA would have to pass Congress. The offices of Sen. Mike Lee and Rep. Raul Labrador both confirmed to NBC News last week that they plan to introduce it.

Trump has previously signaled support for FADA, and his pick for Attorney General, Sen. Jeff Sessions, recently defended it.