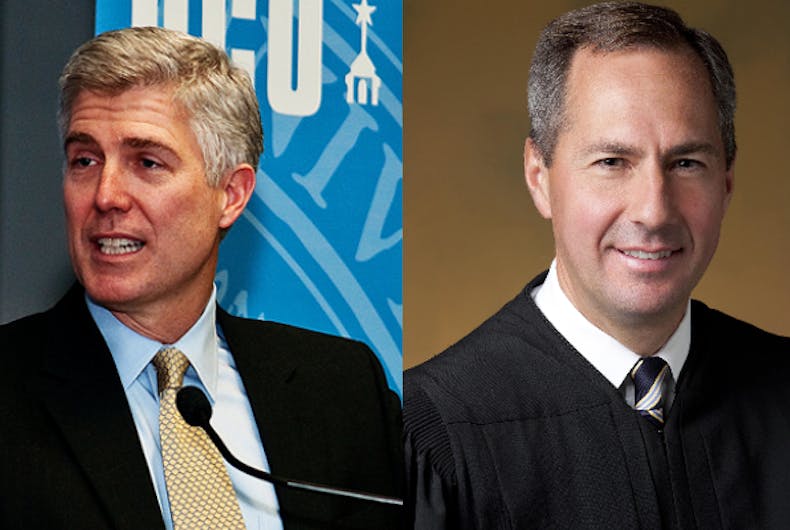 UPDATE: President Trump chose Neil Gorsuch as his nominee to the Supreme Court.

With Donald Trump reportedly set to announce his pick for the Supreme Court today, here is an examination of how each of the much-discussed potential picks – Neil Gorsuch and Thomas Hardiman – might rule on LGBT issues. According to Washington scuttlebutt, the most homophobic of Trump’s previously announced potential justices, William Pryor, has been knocked out of the running thankfully.

Gorsuch has not decided any cases that directly spoke to LGBT rights. As a lawyer though, Gorsuch wrote an article in 2005 for the National Review arguing that liberals are using the courts too much and specifically mentioning same-sex marriage:

While he didn’t exactly say he opposed same-sex marriage, someone who believed that an entire class of people was being denied access to a legal institution solely because of bias would not have lumped same-sex marriage in with school vouchers.

But maybe his ideas have changed over the last decade, especially since his prediction that the public wouldn’t come around on same-sex marriage was proven wrong.

In 2006, he was appointed to the 10th Circuit Appeals Court in 2006 by George W. Bush. He was easily confirmed by the Senate and has earned himself a reputation as a solid conservative, so much so that SCOTUSblog devoted a long post to saying he’s the second coming of Antonin Scalia.

He has not ruled on an LGBT rights case, but he has ruled on reproductive rights. Two of his more famous rulings were in the two Supreme Court cases about contraception and the Affordable Care Act (ACA). The ACA required health care plans that employees earn and that the government subsidizes meet certain basic standards, one of which was providing contraception (churches were excluded). In Burwell v. Hobby Lobby, the corporation argued that its religious beliefs were being violated by the ACA. Gorsuch sided with Hobby Lobby, holding that a for-profit business could have religious beliefs, with which the Supreme Court later agreed.

The Obama White House offered a compromise, then, saying that employers that object to contraception would just file a form stating they had an objection and the insurance company would eat the cost of contraception. Of course, the Religious Right didn’t like this compromise, since the goal isn’t to keep their hands clean of contraception but to actively deny it to other people. In Little Sisters of the Poor Home for the Aged v. Burwell, a Catholic non-profit argued that even saying they opposed contraception was an undue burden on their religious freedom. The 10th Circuit Court denied them a hearing, but Gorsuch dissented and argued that the court should show more deference for the religious beliefs.

Considering how “religious freedom” has become a popular excuse by the right to deny LGBT equal rights, this is particularly worrisome. The idea that there is an “undue burden” placed on an employer for simply requiring them to say they don’t want to do something they object to – and that such a burden is large enough that it trumps an employee’s right to fair compensation and the government’s interest in subsidizing decent health insurance – is a big stretch, but Gorsuch was willing to go there.

Gorsuch would probably object to this analysis, since he argued in the National Review that politicizing judges makes them less effective: “The judiciary’s diminishing claim to neutrality and independence is exemplified by a recent, historic shift in the Senate’s confirmation process…. It is a warning sign that our judiciary is losing its legitimacy when trial and circuit-court judges are viewed and treated as little more than politicians with robes.”

It would be more convincing if he hadn’t written that in a conservative rag like the National Review.

Hardiman was appointed to the 3rd Circuit Court of Appeals by George W. Bush in 2007. Since then, he has ruled fairly consistently as a conservative judge, according to SCOTUSblog. However, most of his votes as an appeals court judge have been on cases related to gun rights, criminal law, the death penalty, and other areas that are hard to get information about how he would rule on LGBT issues.

Most of Hardiman’s rulings on religious freedom were in cases where prisoners were suing prisons for violations of their religious freedom, and Hardiman usually sided with the prisons. One exception is a case where he dissented from an opinion that allowed an elementary school to bar a parent from reading from the Bible as part of a kindergarten “Show and Tell” activity. Hardiman wrote that the school’s actions “plainly constituted” viewpoint discrimination against the parents and their child.

So How Would They Rule?

It’s hard to tell how either of these candidates would rule on LGBT issues if they were on the Supreme Court. While Gorsuch’s rulings on the ACA cases are worrisome, he could be another Anthony Kennedy – opposed to women’s reproductive freedom but in favor of equal rights for LGBT people. And I wouldn’t read much into Hardiman’s ruling in the discrimination case described above – Hardiman’s decision was simply to allow the suit to go forward and only happened because so much of the harassment the plaintiff received was about his femininity, not his sexuality. Vox‘s Dylan Matthews argues that these few liberal rulings are outweighed by the “bulk of his judicial record.”

That said, a judge’s rulings on LGBT issues come from more than their legal framework or political persuasion. A judge’s personal animosity towards LGBT people can shine through a ruling even when they think their motivation is disguised in dry discussions of precedent.

Take, for example, Antonin Scalia’s dissent in Romer v Evans, where the Supreme Court ruled that Colorado’s ban on several cities’ anti-discrimination laws denied LGBT people due process rights. Scalia repeatedly referred to “homosexual ‘orientation'” (with scare quotes), compared homosexuality to murder, referred to anti-discrimination laws repeatedly as “special treatment,” and stressed that Coloradans were “entitled” to be “hostile” to homosexuality. It’s no surprise that he always dissented in pro-LGBT Supreme Court rulings – he used his queerphobic worldview to ground his reasoning and ended up with queerphobic results.

But with so little information available, any predictions about how either will vote on LGBT issues at this point aren’t worth much.