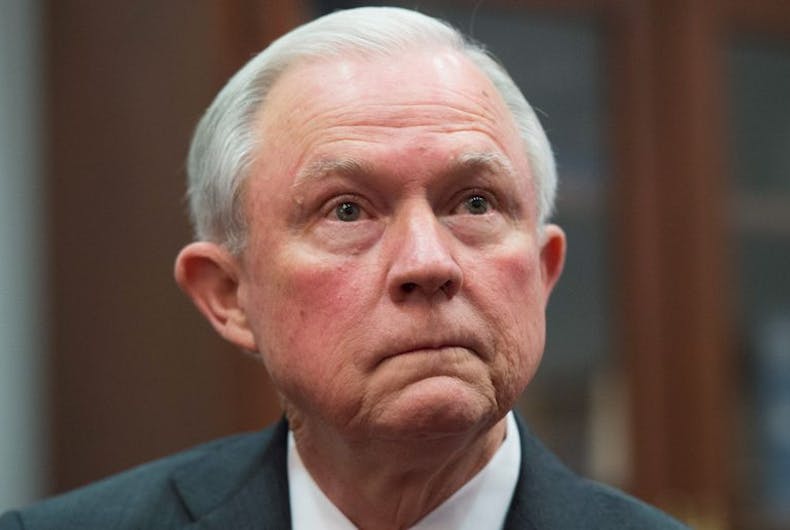 President Donald Trump’s nominee for Attorney General Sen. Jeff Sessions is standing firm on his support of a bill that would allow for discrimination against the LGBTQ community on the basis of a firmly held religious belief.

In a response to questions sent by Sen. Al Franken, Sessions objects to a characterization of the bill as being “deceptively named” and argues for why he feels is is needed.

The First Amendment Defense Act, or FADA for short, would allow landlords, business owners, healthcare providers, and employers to refuse to provide goods and services to whomsoever they choose so long as they can argue that doing so would conflict with their chosen set of beliefs.

“Some have argued that FADA is necessary to protect pastors, ministers, and churches who fear that they’ll be forced to marry gay and lesbian couples,” writes Franken. “But the First Amendment already prevents clergy or churches from being forced to marry a couple if doing so is contrary to their beliefs. It always has. The Supreme Court’s decision in Obergefell v. Hodges, which recognized that same-sex couples have the right to marry in all 50 states, did not change that.

“Why do you believe that a bill like FADA is necessary? And how do you reconcile your support for FADA, which would sanction discrimination against lawfully married gay and lesbian couples, with your claim to ‘understand the demands for justice and fairness made by the LGBT community?'”

“First, I reject the characterization of the First Amendment Defense Act as ‘deceptively named,'” Sessions responds. “During the oral argument in Obergefell, Justice Alito asked former Solicitor General Donald Verrilli whether a private university or college could lose its taxexempt status if it opposed same-sex marriage. General Verrilli responded: ‘it’s certainly going to be an issue. I don’t deny that.’ Thus, the purpose of the legislation was to prohibit the federal government from taking discriminatory actions against any person based on their belief or action in accordance with a religious or moral conviction. I supported this legislation because I believe that we can, and should, protect the rights of all citizens— including LGBT individuals and those with traditional views of marriage. I do not see freedom as a zero-sum game. I understand the critical and historic role of Department of Justice in upholding our nation’s civil rights laws. If I am fortunate enough to be confirmed as Attorney General, I will enforce those laws to the letter.”

If FADA manages to become law, it would overturn the executive order signed in 2014 by former president Obama prohibiting anti-LGBTQ discrimination among federal contractors.

Press Secretary Sean Spicer said on Monday that he does not know whether or not the order protecting these workers would remain in place.

Trump has signaled support for FADA as well, pledging to sign it on his website under the title “Issues of Importance to Catholics. It was added in September of last year and remains on the site at time of writing.

Franken also grills Sessions on a number of other topics, including whether Sessions would continue the work of his predecessors in the Department of Justice to work for advancing and protecting LGBTQ rights.

“The Civil Rights Division has a historic and proud record of defending the civil rights of all Americans, particularly the most vulnerable. That will certainly continue under my leadership, if I am fortunate enough to be confirmed as Attorney General,” Session writes.

Franken then asks Sessions why he opposed the Matthew Shepard and James Byrd, Jr. Hate Crimes Prevention Act of 2009, which then President Obama signed into law.

“Any statement I made during debate over the Matthew Shepard and James Byrd, Jr., Hate Crimes Prevention Act of 2009 reflected an opinion that I reached based on information available to me at the time. If I am fortunate enough to be confirmed as Attorney General, I will work diligently to ensure that all Americans receive equal protection under our laws,” Sessions answers.

Franken then notes that federal law does not require state or local law enforcement to report hate crime incidents.

“Do you agree that underreporting of hate crime incidents by state and local law enforcement remains an obstacle to combatting hate crimes? If not, why?” Franken asks Sessions.

“While I am generally familiar with Director Comey’s concerns about underreporting, but am unable to thoroughly evaluate his assertion or offer an opinion as I have not been presented with information necessary to do so. However, if I am fortunate enough to be confirmed as Attorney General, I would expect to learn more about this issue and give it my careful consideration,” he responds.

Franken then asks about Sessions’ stance on homeless LGBTQ youth.

“You were one of three senators who opposed the effort to reauthorize the Runaway and Homeless Youth Act in the Judiciary Committee in the 113th Congress. Why exactly did you oppose?”

“I was concerned with what I believed to be overly broad and vague language in the bill that could have discriminated against faith-based organizations that help form the fabric of the United States’ social services, and would have undermined the goal of the bill by making it more difficult to protect and provide services for at-risk individuals,” Sessions writes.

The back and forth covers a number of other topics, including abortion and government surveillance. You can read the entire exchange here.