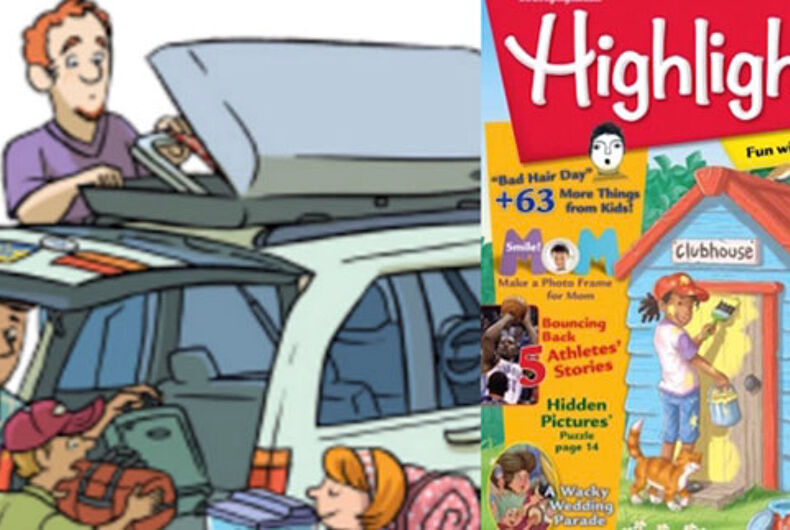 After earning the wrath of One Million Moms and enduring a backlash from families that include LGBTQ moms, dads and children, Highlights will finally feature a same-sex couple in its February edition.

Highlights is one of the longest running children’s magazines in the U.S. and has been published by the same family in Columbus, Ohio since 1946. But never has the periodical ever featured anyone queer.

That’s why Kristina Wertz and Kara Desiderio contacted Highlights‘ customer service department last September, to express concern that their one year old daughter did not see her family represented in her favorite magazine, according to a statement from Family Equality Council.

The couple received no response until they expressed their concerns on the publication’s Facebook page. And the response sparked a furor among LGBTQ families.

“Please be assured that it is very important to us that every child see his or her “face” in the pages of our magazines at some point—that every child feels that Highlights is truly for them. We will continue to think deeply about inclusion —specifically, how to address it in developmentally appropriate ways for our broad audience.”

The magazine circled back and then extended a promise of inclusion, in the future:

That got the attention of One Million Moms, which issued a call to action from its far fewer than one million followers  — who are mostly men, by the way.

“This would be a deal breaker for conservative families. Parents are left with no other choice than to cancel their subscription. Even if 1MM didn’t disagree morally with the decision, it is not a magazines’ job to introduce so called “social issues” to children. That is a parent’s role.”

Good to its word, Highlights ignored the supposed threat and revealed a pair of dads will be featured in a story in the February issue, PinkNews reported.

The magazine will show the gay dads loading up a van for a family trip. Children will be invited to write a story about their own family vacation, and to send it in, in hopes theirs will be chosen for publication.

“Has your family ever taken a memorable family trip?”

“Tell us where you went and what you liked about it.”

Christine French Cully, the magazine’s editor in chief, told the Washington Post: “We did expect and received a backlash when we committed to becoming more fully reflective to all the different kinds of families out there.

“We expect this will make some people unhappy. Our focus remains on creating the best possible content for children.”