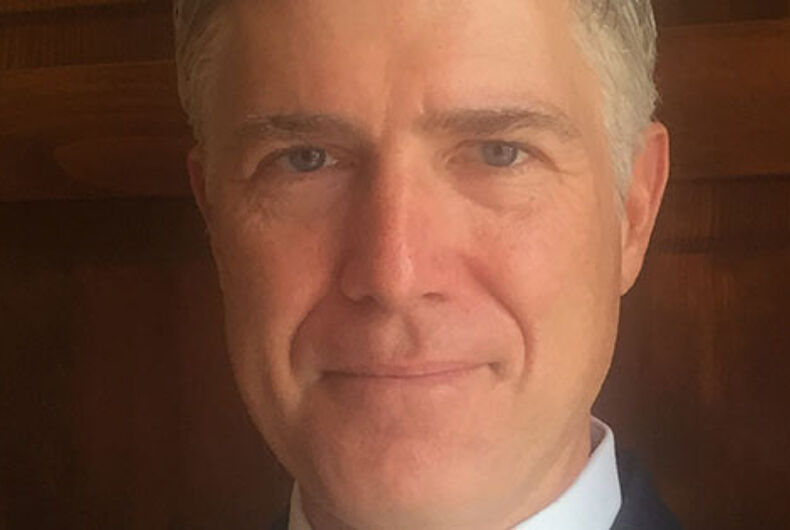 The conservative judge President Trump announced on Facebook Live as his nominee to replace far-right wing Supreme Court Justice Antonin Scalia is a 49-year-old federal appeals court judge in Denver, Colo. — a state Trump lost to Hillary Clinton in November and the home of the late associate justice, Byron White.

Neil Gorsuch is no stranger to the high court, having clerked for Justices White and Anthony Kennedy. In 2006, he was appointed to the 10th Circuit Appeals Court in 2006 by George W. Bush.

Although he hails from the West, Gorsuch was educated in the northeast at Columbia and Harvard. But if confirmed, he will be the youngest on the bench right now.

And from a speech he gave following Scalia’s death last year, it’s clear he is cut from the same cloth.

Gorsuch told students at Case Western Reserve University’s law school in February 2016, he admired Scalia for his unyielding textualism — how a justice interprets a law according to what is written, rather than taking into consideration the intent of legislators or the consequences once it is enacted.

Scalia’s greatest achievement, according to Gorsuch, may have been his emphasis on the differences between lawmakers who, he said, use the law according to their own morals and ambitions for society’s future, and judges, who “should do none of these things in a democratic society.”

“Judges should instead strive, if humanly and so imperfectly, to apply the law as it is, focusing backward, not forward, and looking to text, structure, and history to decide what a reasonable reader at the time of the events in question would have understood the law to be.”

Gorsuch also praised Scalia for how he “correctly” interpreted statutes, calling it undoubtedly a “success:” he quoted Scalia as saying: “If you’re going to be a good and faithful judge, you have to resign yourself to the fact that you’re not always going to like the conclusions you reach. If you like them all the time, you’re probably doing something wrong.”

Another parallel between Gorsuch and Scalia, as reported by Business Insider, is their faith in what is called originalism, the interpretation of the law by determining the meaning of the Constitution as it was written. David Feder, one of his former clerks, wrote in a blog post for the Yale Journal on Regulation:

“‘We need to get this right,’ was the motto — and right meant ‘as originally understood.”

Gorsuch has not decided any cases that directly spoke to LGBT rights. But as an attorney in 2005, Gorsuch wrote an article for the National Review in which he argued that liberals are using the courts too much. He cited same-sex marriage:

He has not ruled on an LGBTQ rights case, but he has ruled in one of the most significant reproductive rights cases in recent memory. The Affordable Care Act required health care plans that employees earn and that the government subsidizes meet certain basic standards, one of which was providing contraception (churches were excluded).

The Obama White House offered a compromise, then, saying that employers that object to contraception would just file a form stating they had an objection and the insurance company would eat the cost of contraception. That did not sit well with the religious right, whose mission is for contraception to be denied in all cases, and abstinence and adoption offered instead of safe sex instruction and abortion.

In another case, Little Sisters of the Poor Home for the Aged v. Burwell, a Catholic non-profit argued that even saying they opposed contraception was an undue burden on their religious freedom. The 10th Circuit Court denied them a hearing, but Gorsuch dissented and argued that the court should show more deference for the religious beliefs.

Another telling bit of perspective: Gorsuch argued in the National Review that politicizing judges makes them less effective:

“The judiciary’s diminishing claim to neutrality and independence is exemplified by a recent, historic shift in the Senate’s confirmation process…. It is a warning sign that our judiciary is losing its legitimacy when trial and circuit-court judges are viewed and treated as little more than politicians with robes.”

As Alex Bollinger pointed out in LGBTQ Nation earlier Tuesday, it would be more convincing if he hadn’t written that in a conservative rag like the National Review. But a judge’s rulings on LGBTQ issues come from more than their legal framework or political persuasion than their op-eds. It remains unclear if Gorsuch will see civil rights through a lens of encumbrance upon religion or as a liberty guaranteed by the Constitution.