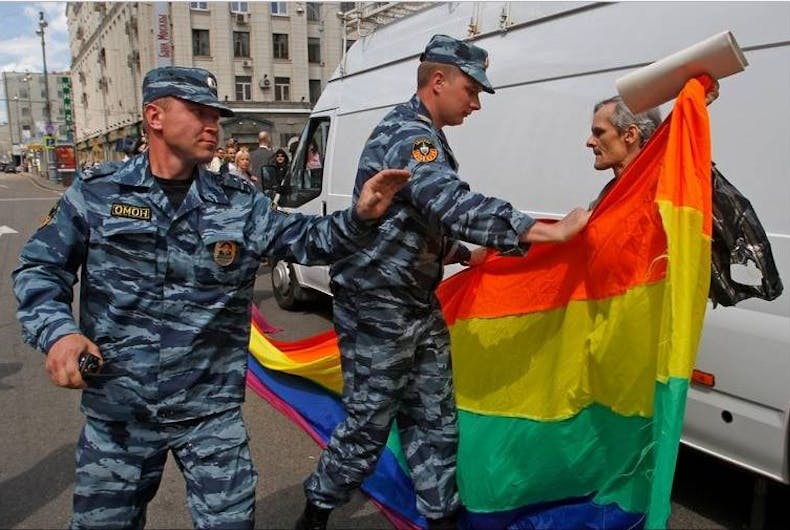 An LGBTQ pride event in the Arctic circle, in the town of Salekhard, Russia, has been banned due to the “gay propaganda” law, signed by President Vladimir Putin in 2013.

Police have banned around 300 people who were looking to march on Jan. 29 in what was named Polar Pride. The city administration cited the so-called gay propaganda law, which bans providing information about homosexuality to minors. They claimed the march would be harmful to children’s “health and development.”

The same law was used in defense of a 100 year ban on gay pride marches in Moscow, the nation’s capital, handed down in 2012. Moscow Pride began having marches in 2006 and continued through 2011, in spite of repeated homophobic attacks against demonstrators.

“It will, if necessary, brought to the European Court of Human Rights,” said Alexeyev, who is also a lawyer and journalist. He added that the law is in violation of Russian’s constitution, which protects the right of the people to freely assemble.

“It happens in broad daylight and nobody does anything about it. It makes me shocked, it makes me sad,” he continued.

Police in Russia continue to break up attempts at LGBTQ rights demonstrations.

“This is one of the best ways to celebrate as well as for societies to get to know each other.”

Fredriksen concluded with a word of hope.

“I give them my strong support. I want them to know democracies around the world are monitoring what is going on in Russia and we stand with them and support them,” he said.

Meanwhile, President Donald Trump is set to speak with Putin by phone on Saturday. Trump adviser Kellyanne Conway said she expects they will speak about issues on which they have “common ground.”

Yet with Trump’s administration filled with those with anti-LGBTQ views and voting records, his worrying Supreme Court nominees list, and with his own support of the discriminatory piece of legislation known as the First Amendment Defense Act, there is reason to worry that Putin could be one more bigoted voice whispering in our new president’s ear.