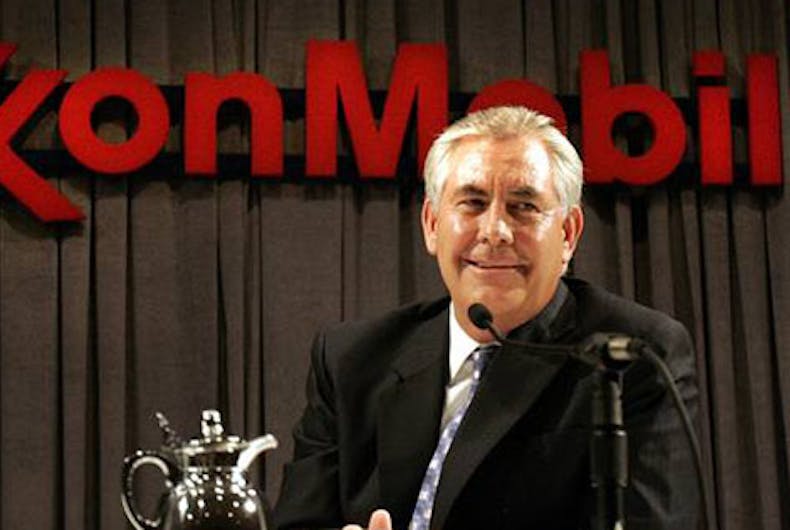 ExxonMobil CEO Rex Tillerson has a lot on his plate these days: brush up on what it’s like to work as a government employee, send thank you cards (in Russian, no doubt) to Vladmir Putin, and divest more than $233 million in his company stock, which he can do tax-free.

Oh, and then there’s that pesky lawsuit from 2013 that’s still out there, accusing ExxonMobil of discriminating against LGBTQ people in its hiring practices.

We’ve already told you how ExxonMobil was the only corporation in history to receive negative ratings on the Human Rights Campaign’s Equality Index, in 2012 and 2013, for lacking any protections whatsoever for LGBTQ employees.

As the Washington Blade reports, the LGBTQ group Freedom to Work filed a complaint in 2013 with the Illinois Human Rights Commission, accusing the oil company of violating a 2005 state law prohibiting anti-LGBT discrimination. Freedom to Work is the same group that successfully lobbied President Obama to sign an executive order barring anti-LGBT discrimination among federal contractors a year later, in 2014.

The group sent two fictitious resumes to the ExxonMobil for the same job in Illinois: one candidate outed herself as LGBT by including her work at the Gay & Lesbian Victory Fund; the other, less qualified applicant gave no indication about her sexual orientation or gender identity. The less qualified and apparently straight applicant was contacted a number of times by the company about the position, but the more qualified LGBTQ applicant did not hear a peep.

Nearly two years ago, in January 2015, the Blade reports the Illinois Department of Human Rights announced it found “substantial evidence” of anti-gay discrimination at ExxonMobil and enough for the case “to be heard before a trier of fact so that credibility can be determined.”

According to the Blade, the lawsuit is still pending and there’s no indication when it might be resolved.

Obama’s executive order barring federal contractors from engaging in anti-LGBT employment discrimination — which president-elect Donald Trump could revoke — led ExxonMobil to finally adopt an LGBT non-discrimination policy. The Blade reports the company has been the recipient of more than $1 billion in federal contracts over the past decade.

The company, its lawyers and the Trump transition team refused to comment to the Blade.

The HRC Equality Index gave Tillerson’s company an 87 for 2017, but this lawsuit hanging over its head has advocates concerned about what it means for the CEO’s appointment to be the nation’s foremost diplomat.

Rena McDonald of the LGBT workplace equality group Executive Pride told the Blade his antigay policies are “further emphasized” by the Illinois finding that “Exxon discriminated against a potential new hire who was better qualified for a position, simply because of their affiliations with the gay community.”

“Trump’s choice of Rex Tillerson as the secretary of state should be a serious concern for Americans worried about Equal Rights for all employees.

“Even though the LGBTQ community has made great strides in securing equal rights in other areas, the workplace remains an environment where discrimination not only still exists, but is legal in most states. This creates a hostile environment where you can now get married and then be legally fired for it.”